Bringing homelessness down to pre-Katrina levels 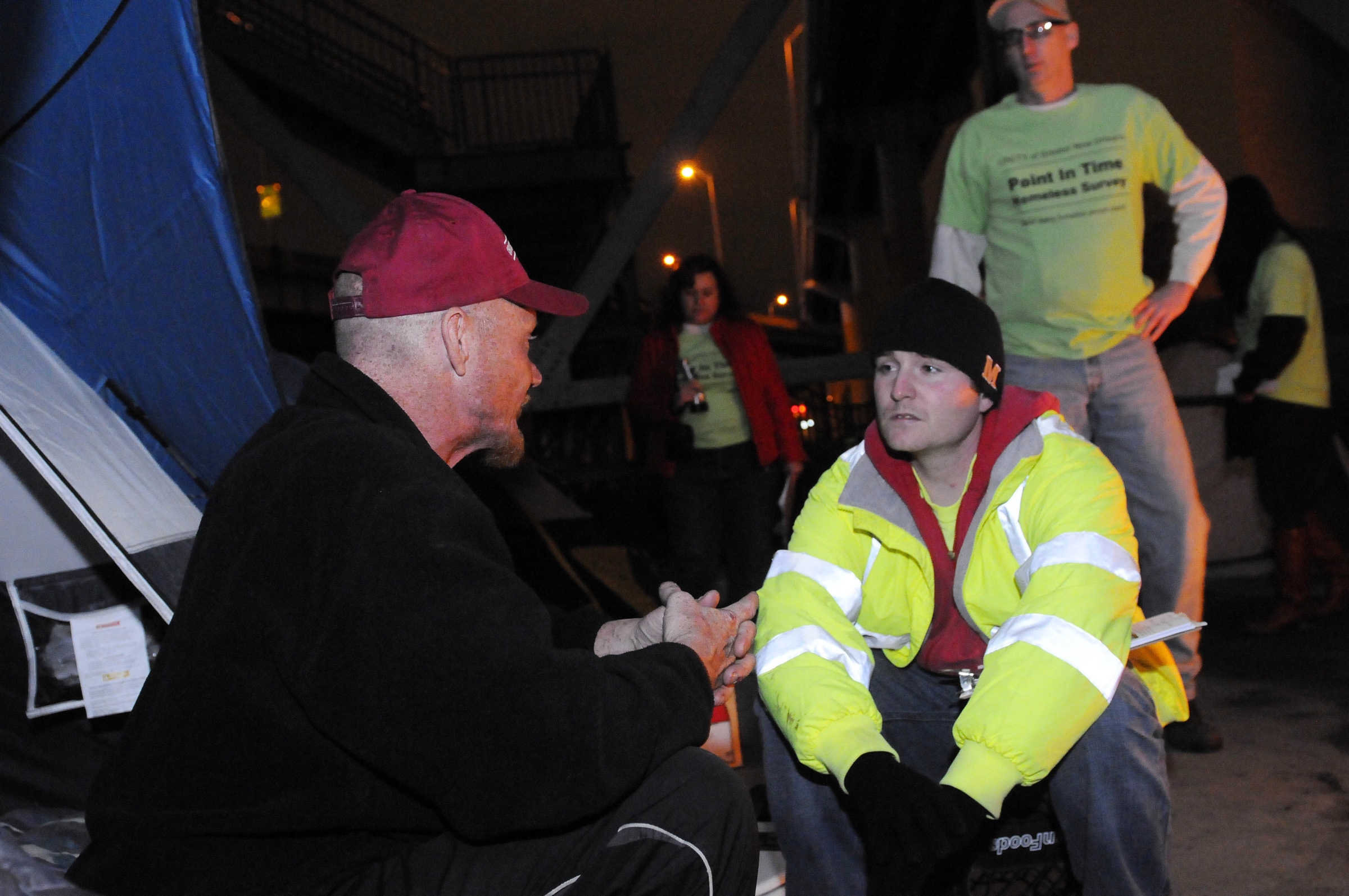 “The number of people who are suffering in homelessness on a single night has been brought below what it was before Hurricane Katrina.” Link to The Lens op-ed by UNITY executive director Martha Kegel or read it below:

New Orleans has reached a long-sought milestone: For the first time since the levee failures caused a flood of homelessness in New Orleans nearly nine years ago, a recent survey found that the number of people who are suffering in homelessness on a single night has been brought below what it was before Hurricane Katrina.

During the city’s annual one-night survey of the homeless, 2,051 people were counted in January 2005. That number had soared to 11,6619 by January 2007, and has significantly declined in every subsequent count. The number fell to 1,981 in our survey this past March — an 83 percent reduction in homelessness since 2007.

This is a remarkable achievement.

When the levees broke, everyone in New Orleans became homeless. But many of the poorest and most vulnerable among us became chronically so. Rents skyrocketed; stress exacerbated mental and physical illness and substance use disorders — and this at a time when the health care system had evaporated as had the extended family networks, on which many vulnerable people once relied. They turned for refuge to the streets, homeless shelters and the thousands of abandoned buildings blighting the landscape. At the peak of the crisis in 2007, the number of homeless people was more than five times what it had been before the storm.

Things seemed hopeless. During 2007 and 2008, an estimated 2,000 people slept at one time or another in two huge homeless camps – one in front of City Hall, the other under the Claiborne Avenue overpass. The people in the camps were suffering; many were severely disabled, and a survey showed that 40 percent had medical conditions that put them at high risk of dying soon. The overwhelming majority were Katrina survivors.

But the camp residents were not the only people affected. Those who drove by the camps every day were gripped with worry. They were moved by the massive scene of human suffering but also feared that the sprawling, filthy camps were a sign that the city might not recover. Perhaps it had been a mistake to come back to New Orleans.

But many people overcame despair and sprang into action, fueled by our now-shared understanding of how devastating it is to be homeless and the feelings of hopelessness and insecurity it brings. Backed by resources provided by government partners, foundations and local donors, a network of nonprofits scurried to find apartments and jobs for the people in the camps. Case managers, many of them still displaced from their own homes, put their personal problems aside and worked night and day to assist those whose needs were even greater. An outreach team was assembled, men and women willing to go anywhere. Scouring abandoned buildings at night in search of homeless squatters, they found that the overwhelming majority were severely disabled Katrina survivors.

The goal of ending veteran and chronic homelessness by next year may seem daunting, but it is not nearly as daunting as what has already been achieved …Federal, state and local government were strong partners. A major initiative by U.S. Sen. Mary Landrieu and the State of Louisiana secured the Congressional resources for a new approach. Called “Permanent Supportive Housing,” it provides affordable apartments and support services for Katrina survivors with mental or physical disabilities who need long-term help. Mayor Mitch Landrieu initiated a city “Plan to End Homelessness” and formed a local Interagency Council on Homelessness. HUD and the federal Interagency Council on Homelessness are increasing the involvement of housing authorities, developers and banks.

The results have changed thousands of people’s lives for the better. Julie and Wayne Fant, who in 2007 were living in squalor in the homeless camp outside City Hall, today live clean and sober in a tidy home in lower Mid-City.

Barry Knox, a Ninth Ward ship worker returned from his post-Katrina exile in Houston only to wind up homeless under the Calliope and Claiborne overpasses, battling chronic obstructive pulmonary disease and depression. Now cooking meals in his own apartment, he has a new lease on life.

Another of our clients is an elderly woman with schizophrenia who spent many years living outside a fast-food restaurant on St. Charles Avenue, resisting all attempts to help her. Today, thanks to the persistence of our outreach team, she is successfully housed in an apartment building with full-time on-site case managers to assist her.

Each success creates the momentum to keep going. With nearly 2,000 people still suffering in homelessness on a single night, and many more over the course of a year, we are keenly aware that we have a lot more work to do.

Here is how every person can contribute to New Orleans’ goal of ending veteran and chronic homelessness by 2015:

Ask your church, synagogue, mosque, school, employer, or service group to do a drive to collect these items.

Make a donation to Unity’s Make a Home Fund, which purchases mattresses and other essential items in short supply, so that every homeless veteran and disabled chronically homeless person can set up housekeeping. (Go to www.unitygno.org).

Call us if you have an apartment in good condition and are willing to rent to a homeless person, with rent subsidies and a case manager visiting on site. (call 504-899-4589 ext. 114).

Don’t forget about formerly homeless veterans and chronically homeless people with disabilities once they are housed. These individuals typically suffer from medical problems, depression and isolation and need to know that the community still cares about them. It’s how they maintain the stability that keeps them from falling back into homelessness. Invite them to attend your house of worship, or ask your faith group to wrap birthday presents or create seasonal holiday baskets that can be delivered to them in their apartments.

The goal of ending veteran and chronic homelessness by next year may seem daunting, but it is not nearly as daunting as what has already been achieved — that 83 percent reduction over the past seven years. As the only city in America where everyone not so long ago became homeless together, what will carry us to victory is our community’s shared passion for making a home for our most vulnerable neighbors.

Martha Kegel is executive director of Unity of Greater New Orleans, a nonprofit coordinating community partnerships to end homelessness. She will be at the White House this week for an event recognizing New Orleans and other cities that are making substantial progress in reducing veteran homelessness.