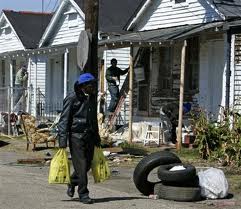 I’ve got a headache. It all started with a conversation through the threadbare screen door of an abandoned house.

A week ago myself and Clarence scampered over a chain-link fence, trail blazed through an overgrown side yard, pushed open a crumbling back door falling off the hinges, danced across rotted floorboards and illuminated the well-established cot. Bedrolls and tattered mattresses in abandoned houses mean nothing to us until we meet the person who claims it; thus our little midnight conversation.

“And Katy too!” Katy shoots me that Katy Quigley look, assuming I forgot she’s standing right beside me. It’s the same look that freezes her ten year-old son and instills the fear of motherhood in a 31 year-old man.

“And Katy too!” I yell back smiling, a desperate and half-hearted attempt to placate my partner.

After a minute or two of making a general racket, our front stoop pleas are met with an answer.

“Shoosh! Be quiet! My neighbors be hearing and I don’t need them to be coming and shooting me!” It’s the slightly drunk, slightly psychotic and slightly unnerving response I wasn’t expecting.

A short, rambling and incoherent conversation is finished with an agreed upon meeting tomorrow afternoon at Fig and Eagle street. That’s fine. Its 11:30 at night, there isn’t a streetlight for two blocks and the newly hatched mosquitoes are doing their best to imitate flying syringes. Thus our little rendezvous at Fig and Eagle.

For those who don’t know where Fig and Eagle is, I’ll explain. You go straight down Claiborne Avenue, hang a lefty at purgatory, go past Hades and enter the infernal regions. It’s where the living mortgaged their souls to the crack pipe and the zombies have track marks creeping up their arms. Like anywhere in New Orleans, watch out for potholes. Two more days left in an already long month and I’m feeling the tension on the corner.

“Here’s our guy.” Katy states as we pull to the corner. He’s wearing army fatigues, rubber fishing boots, a camouflaged New York Yankees cap and two pairs of sun glasses. He’s sitting alone on wooden steps that lean onto the side of a rotting abandoned house. He’s screaming into the wind, oblivious to the prejudiced looks he getting from the ten addicts huddled across the street.

He stands up and embraces us as we walk toward him. His greeting is punctuated with “friend,” “homey” and “sweetie”. He screams some unintelligible insults at the addicts and talks about “Getting mine.” Grasping a 10 oz bottle of Night Train stowed in a paper bag, a strong odor of cheap wine escapes his mouth and he’s unsteady on his feet. Whatever was holding the attention of 10 chronic inebriates and mental health patients before we arrived is quickly forgotten. I imagine it’s kind of like HBO for the disaffected as they tune in to a new episode of the crazy guy who sits on the rotting steps all day.

Twelve years behind a bar I’ve learned a little something about redirecting the drunk. A thorough bio-psycho-social reveals a startling 50 plus year history of co-morbid mental illness, systems failures and medical catastrophe. He’s a great client. Exactly the kind of head ache I’m looking for. My real problem is the office.

In a perfect world, I wouldn’t have to apply my clinical skills sitting on one of the most violent street corners in New Orleans. In a perfect world I would be surrounded by my colleagues dashing to copy machines and answering phone calls in a temperature controlled office, all the while sitting in their comfortable ergonomically correct desk chairs. Instead, I have a psychotic alcoholic attempting to recite his life story while simultaneously attempting to keep the neighborhood elements at bay for a desperate 30 minutes. As the addicts wander in and out of abandoned houses and the hours countdown to check day, we’re all counting the minutes. I’m especially concerned about the young man who keeps circling the block in the murdered out Chrysler with 22 inch rims. I know he’s not selling Girl Scout cookies.

“Hey we’re done. Let’s get back to the office.” I tell Katy, one of the few times she’ll ever hear that.