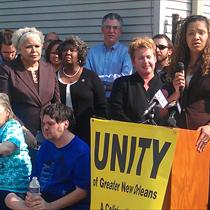 New Orleans – Some major progress when it comes to getting a hold on the homeless crisis in New Orleans and Jefferson Parish.

Numbers released this morning by the organization, UNITY of Greater New Orleans, show the area is making headway tackling the post Katrina epidemic.

Since the organization did its last study in 2009, the homeless rate has dropped in New Orleans and Jefferson Parish 12-percent, going from more than 11,000 homeless to now about 9,200.

“If you look though at the people who are in the most dire homeless situations who are actually lying on the street in abandoned buildings in emergency shelters, that number has gone down 23 percent,” Martha Kegel said.

But, Kegel, the Executive Director of UNITY of Greater New Orleans, says the homeless crisis across the metro area still remains an overwhelming situation.

“We realize we have a whole lot of work to do, and it’s going to take years, but we will keep plugging at it, because we see what we’re doing is working,” Kegel said.

She says homelessness in New Orleans is a long-standing effect of Hurricane Katrina. The loss of affordable housing and rents that have sky rocketed.

“The largest share of homeless people in New Orleans are living in abandoned buildings,” Kegel said.

She says what sets New Orleans apart from any other city in the county is that over 4,700 homeless people live in abandoned houses across the city, and according to the 2010 census, there are now over 38,000 abandoned commercial residential buildings across metro New Orleans. Many of those living in those abandoned homes across the city are Katrina survivors.

UNITY of Greater New Orleans says over 1,000 people have been housed permanently since 2008. They say their goal is to have 2500 vulnerable and disabled homeless people in permanent housing by 2013.