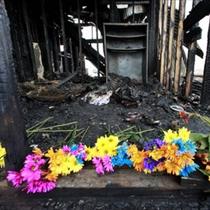 New Orleans – The wintry forecast for the rest of the week has some people in the city nervous about the possibility of more fires being ignited by squatters.

Those concerns are fueled by a fire which recently killed eight young squatters in the 9th Ward of New Orleans.

Even before the deadly fire UNITY for Greater New Orleans had a team of workers scouring abandoned properties for squatters and around the city.

“They’re out every week, and on freeze nights you know they’re out in full force,” said UNITY Executive Director Martha Kegel.

And with the pain of the abandoned warehouse inferno still fresh, the hunt for squatters grows more intense on many fronts.

“It’s dangerous, it’s highly skilled and we only have the funding for four people to be doing that work, so you know we need more resources for that,” added Kegel.

To be sure, many homeless individuals resist the notion of heading to city and private run shelters.

“You would think that this is crazy that they prefer to stay in an abandoned building, but it seems to be a strong preference of a lot of people,” said Kegel.

Still, in the days following the warehouse fire, the New Orleans Mission has seen more of a willingness by the homeless to come in from the cold. Sunday night 200 people sheltered there. And the NOPD’s Homeless Outreach Unit is also active, searching for the down and out sleeping on the streets.

“They bring them to us if they see them on the streets or on the sidewalks and they come in, basically if the police step in and bring them in, they’ll stay,” said Linda Gonzales of the New Orleans Mission.

“Literally about 3,000 people in tens of thousands of buildings and so it’s like a needle in a haystack search, except there are lots and lots of needles and they’re human beings and you have to find them,” stated Kegel.

She said rigid shelter hours turn some homeless people off, so she believes the city needs other places with more flexible hours.

“We need some shelters that can accommodate people whatever their needs are to get them off the street, so they don’t freeze to death and they don’t burn down buildings,” said Kegel.

But clearly, with a homeless problem as enormous as it is in the city, it is overwhelming problem for those who go out and engage in search and rescue at night.

“So as a result we have to triage just like they do in an emergency room, we have to figure out who’s the sickest of the sick, get them the highest level of help,” Kegel said.

As they work to spare the “shelter-less” from the brutal elements and the peril they could face as they attempt to create warmth.