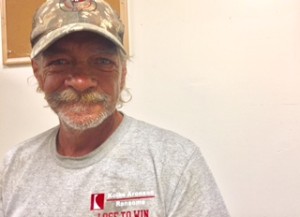 We all know longtime New Orleans handymen like David Aldrich. He never lets his tool bag out of his sight.

But, like many of the people housed by UNITY of Greater New Orleans, Mr. Aldrich’s pay could no longer cover rent in today’s New Orleans.

So for several years, after fixing other people’s houses, Aldrich, 52, would carry his sack of tools home to a blue, inoperable van parked in an abandoned New Orleans lot.

In the winter, nights inside the van were bitterly cold. In the summer, it was unbearably hot and plagued with insects, because he slept with the van’s big door open, to try and capture any available breeze.

Because of tough conditions like these, the average age of death for homeless people is about 40 years. Research shows that of those who are chronically homeless – suffering from mental and physical disabilities and living long-term on the streets — most are likely to die within seven years if left out on the street.

So every time you help house another Mr. Aldrich, we know that, together, we are saving another life.

Helping even those who are too proud or sick to ask for help
Of course, Aldrich knew he was homeless. “But I just called it camping out,” said Aldrich, who has always been optimistic, even though he’s bounced in and out of homelessness, starting when he and his seven siblings were placed into separate foster-care homes when he was about five.

UNITY’s outreach team has learned how to rescue even the most “hard to house” homeless people off the streets of New Orleans. This knowledge comes from lessons learned after Hurricane Katrina, when thousands of people were sleeping on the city’s streets and within its abandoned houses.

Each day, we continue that work, rescuing the city’s most vulnerable people off the streets of our city. Clarence White, a street-outreach worker for UNITY of Greater New Orleans, works the night shift to find homeless people, even those who, like Mr. Aldrich, are especially hard to find because they are tucked away hidden from public view and are not seeking help.

Once White finds a person with disabilities living on the street, he makes the process as easy as possible. In Mr. Aldrich’s case, the first step was a doctor’s appointment, to certify his disabilities, identified after military service. White confirmed his service with the U.S. Department of Veteran Affairs, while Kathleen North, a clinical social worker on UNITY’s outreach team, assessed Mr. Aldrich’s mental health.

Once a striving foster child, Mr. Aldrich wanted more
More than three decades ago, after bouncing from foster home to foster home, Mr. Aldrich became the only one in his family to earn a high school diploma. Then, right after graduation, he went to the Army recruiters and enlisted.

“I was looking for something better,” he said. With the same goal, Mr. Aldrich learned to be a carpenter, hang drywall and paint houses.

We at UNITY feel fortunate to help Mr. Aldrich find something better now — when his disabilities are catching up with him and he should no longer be suffering on the street.  With your gift on or before GiveNOLA Day,  you can move Mr. Aldrich into an apartment this month, with simple furnishings and a case manager checking in on him regularly there.

To help house Mr. Aldrich and our other most vulnerable homeless neighbors, donate what you can to UNITY before 11:59 pm tomorrow, GiveNOLA Day: https://givenola.org/#npo/unity-of-greater-new-orleans-inc

Thank you so much for caring about New Orleans’ most vulnerable people!

P.S.  Your gift is sorely needed, and you can have a tremendous impact!  With a gift of whatever you can afford, you will play a critical part in reaching UNITY’s goal of housing 350 of New Orleans’ most vulnerable homeless people in their own apartments in the next 12 months.   Thank you!