How can a frail elder stay home, without a home? 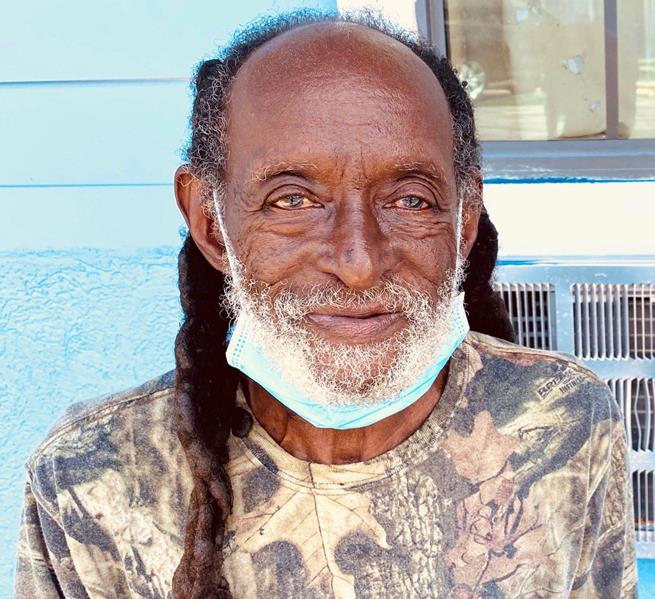 James Anderson, 68, ran heavy machinery when he was a younger man, helping to build levees across Louisiana and in neighboring states.

He is a slight man, standing about 5-foot, 6-inches tall and weighing a little over 100 pounds. So he’d strap into two seatbelts as he drove the backhoes and the diggers across bumpy terrain. But still, he bounced pretty high in the air, he said.

Then, after a few decades, his body could no longer handle the constant bumps and vibrations.

He had always come home to New Orleans between jobs. But about 20 years ago, he returned to his hometown for good. He did odd jobs here in the city and paid his rent on a number of apartments in the Central City area.

Clarence White III, an outreach worker for UNITY of Greater New Orleans, remembers seeing him in the neighborhood around that time: the slight man with striking blue eyes. His neighbors knew him as a gifted cook who often had pots of beans or backbone stew bubbling on his stove.

Then, without warning, Mr. Anderson’s health declined. He didn’t know exactly why. He’d always been athletic, with quickness that had made him a standout on the city’s basketball court, despite his height. “In my mind, I still can play,” he said with a grin. But in real life, he found that his breath got short very quickly. He became thin and frail. He could no longer work. He lost his apartment.

For the past year or two, he’s been sleeping steadily outside, often near a downtown church or near the public library, places where he felt safe, he said.

Three days before Christmas in 2018, when he was hospitalized with pneumonia, doctors discovered that his blood-sugar levels had spiked, to the point where pneumonia can become deadly. He ended up on dialysis. Though he now takes medication that helps to stabilize his diabetes, he had been told that he has a tough case of diabetes. And because homelessness makes his meals and schedule inconsistent, his condition has been almost impossible to control. He also struggles with depression.

Then the coronavirus hit New Orleans. Mr. Anderson started to hear that diabetics like him often have trouble recovering from the virus. As he slept on his pile of cardboard outside the main library, he tried to take his mind off of that frightening possibility. “I’d lie there and I’d look up at the stars and I’d talk to God,” he said. “I’d say, ‘Please don’t let this virus get me.’”

Since the pandemic began, UNITY has raised concerns that the virus could take a toll on those whose immune systems had been weakened by life on the streets. A national study found that, because of poor health and chronic medical conditions, homeless people are nearly three times as likely to die from the coronavirus as the general population. On the street, homeless people have scarce access to sanitation, and soap and water, leaving them unable to check the spread of the virus.

UNITY Outreach Worker Clarence White was very concerned about Mr. Anderson, so last month our Outreach Team found him and took him to a low-cost motel, where we bring him three meals a day, make sure he is taking his medicine, and that he is protected from coronavirus.

The next step for Mr. Anderson is Permanent Supportive Housing. Because he is unable to adequately take care of himself, we aim to provide him with an affordable apartment with a case manager who comes frequently to check on him, taking him to doctor’s appointments and making sure he has everything he needs.

He is one of over 500 homeless people whom UNITY and our partners at the city and state are moving off the street into hotels and apartments since the pandemic began.  This is the largest effort ever to house the homeless in the New Orleans area. Our goal – one that we have been working on relentlessly since the pandemic began – is to get every homeless person off the street and into permanent housing, while preventing new homelessness.

Sometimes, as he laid on his cardboard bed outside the library, Mr. Anderson would dream about the food he was going to cook, once he got his own kitchen again. But he wasn’t sure when that day would come.

Since UNITY gave him a motel room, Mr. Anderson said he has felt happier than he has in a long time.  He has spent the past month sleeping peacefully in his own room, safe from the virus. Soon we will give him a key to an apartment that will be linked to supportive services. His mind is already ready, he said: since being in the hotel, his dreams have been filled with visions of pots, bubbling on his own stove.

The pandemic has painfully exposed inequality and an inadequate social safety net. But you can help right these wrongs.  With your help, we are seizing the opportunity to do the right thing: to end everyone’s homelessness as best we can, by cobbling together federal pandemic assistance with private donations.  At the same time, we are scrambling to set up rent assistance programs to hold back a wave of new homelessness anticipated as a result of thousands of people in our community being out of work.

I am asking for your support today for UNITY’s vital work of housing vulnerable people in the New Orleans area.  Our vision is that — with your help — our community can emerge from this crisis with fewer people struggling in homelessness, not more.  Our prayer is that everyone can be given the safety of home.

Will you help make sure that UNITY can prevent the tragedy of a new wave of homelessness?

Please support the largest effort ever to house the homeless in New Orleans. You can save lives and create hundreds of homes today, by making your gift here now.

Thank you so very much for your compassion and kindness.

How can vulnerable people stay safe when they do not even have a home? Your gift today will assist vulnerable children and adults to have the safety of their own homes. Your gift will help ensure that the long-term effect of this pandemic will not be an explosion of homelessness in our community.

Please Give Today
Share our Stories!
Accessibility by WAH