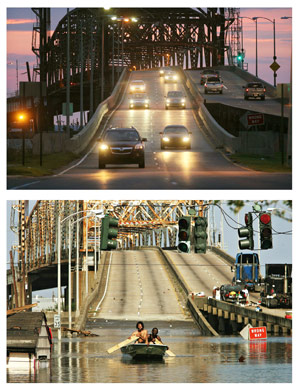 Rebuilding efforts have turned it into a hopeful start-up city, but troubling new — and old — problems abound.

Tim Williamson was asked this month to assess the state of his native New Orleans after the disaster.

“After the disaster?” the nonprofit-group chief executive quipped, with a seen-it-all mordancy that’s as common in the city as a potholed side street. “Which one?”

The last few months have provided a roller-coaster run-up to Hurricane Katrina’s fifth anniversary, which New Orleans was to observe Sunday with solemn prayers, a reunion of Superdome survivors, and a jazz funeral for the more than 1,800 dead along the Gulf Coast.

In early 2010, there was a feeling that the funeral band, come Aug. 29, would have more reasons than ever to make its traditional shift from a dirge to a joyful noise. New Orleans’ unemployment rate was lowest of any large metro area in the nation. A new mayor, Mitch Landrieu, had been elected with the support of blacks and whites. And the Saints had won the Super Bowl.

Then came April, the BP gusher and a four-month lamentation.

“The oil spill was such a reality check,” said Eli Ackerman, a New Orleans activist and blogger who recently moved to New York. “It was a reminder that this was a region that never got over the storm. That in some sense, it’s always going to be between storms.”

Today this 292-year-old city finds itself defined, in many ways, by a state of between-ness — with its people living daily between states of celebration and mourning, optimism and despair, progress and stagnation.

Defying pessimistic projections of 2005, many displaced residents showed their faith in the city by returning home. With nearly 1.2 million people, the New Orleans metro region has recovered 91% of its pre-storm population, while the city proper is at 78%, according to the Greater New Orleans Community Data Center.

It’s not the only good news: Average wages have increased 14% from 2004 to 2008. And thanks in part to radical school reforms, more than half of the city’s public school students attend a school that meets state standards, compared with 28% in 2003-04.

But even the most ardent civic boosters acknowledge that New Orleans remains saddled with both the problems Katrina wrought and the equally enduring scourges that predated the deluge. More than 64,000 buildings in the city remain blighted. Last week, the nonprofit homeless advocacy group UNITY released a report that found that homelessness had doubled since Katrina, and that as many as 6,000 people were living in abandoned buildings.

The scandal-ridden police department soon will probably be closely monitored by the Justice Department, at the request of Mayor Landrieu, who took office in May. The per capita murder rate is the highest in the nation.

“The crime is still terrible. There’s streets down in the 7th Ward that’s killing zones. So when they say we’re back, and everything’s up and running, well, I just have to wonder,” said Melvin Navarre, a retired armored-transport branch manager who rebuilt his house in troubled New Orleans East.

Kirk Joseph, a noted sousaphone player and former member of the Dirty Dozen Brass Band, said life in post-storm New Orleans remains a hassle and that some “nonsense stuff” still needs to be fixed.

If nothing else, the flood-prone city is more heavily fortified. The Army Corps of Engineers has built about 70% of a new perimeter of massive walls, floodgates and levees. The levees have been fortified with clay and covered with rock and concrete paving to prevent them from washing away in the event that they are overtopped.

Reform goes beyond flood control. Katrina catalyzed citizens, national think tanks and some government entities to tear apart outdated or tragically broken city functions. Voters unified an antiquated tax-assessment system in which seven assessors had run little fiefdoms that led to inconsistency and allegations of cronyism. The criminal justice system has seen numerous changes, including a top-to-bottom modernization of the public defender’s office.

The public school system, once one of the worst-performing and worst-managed in the nation, was largely re-imagined by a post-storm act of the Legislature that put more than 100 low-performing campuses in a state-run Recovery School District. Today, 61% of students attend charter schools, the highest rate in the nation, according to a report by the Brookings Institution. City schools are now non-unionized, and, in most cases, parents must choose the school they want their children to attend.

The system is not without problems, or critics: Many on the left were dismayed by the dismantling of the teachers union. Families who lose lotteries for spots at popular schools must often bus their kids across town. The Southern Poverty Law Center last month sued the state for failing to adequately educate 4,500 special-needs students.

But overall, Brookings found that this system has demonstrated “sustained” academic growth since Katrina, based on standardized tests.

More tangible results can be found on campuses like the New Orleans Charter Science and Math Academy, an accumulation of trailers joined by wooden boardwalks on a vacant lot.

The school in one of the city’s poorest neighborhoods — 92% of its 240 students come from low-income families — yet in the two years since it opened in 2008 it has outperformed most other local schools.

The school was the brainchild of Principal Ben Marcovitz, 31, who earned his master of education degree at Harvard University before being drawn to New Orleans after Katrina. Like many others in the city, he believes that long-term solutions to New Orleans’ most intractable problems start in the classroom.

Schools like this one have blossomed on what Williamson, the nonprofit group CEO, touts as the city’s new “frontier for entrepreneurship.”

“What Katrina did, in a sense, is it made New Orleans a start-up city, and everyone here became an entrepreneur — where everybody had to identify our problems and come up with solutions,” said Williamson, who runs the Idea Village, a local business incubator.

The Brookings anniversary reports indeed show a sharp increase in business start-ups, although researchers warn that such numbers sometimes reflect the turmoil workers go through during periods of shock and recession.

The storm stirred up other positive social consequences. Frederick Weil, a Louisiana State University researcher, found that although post-Katrina New Orleanians score below the national average on many measures of civic engagement, they were 24% more likely to attend a public meeting.

Before Katrina, print shop owner Arthur “Bubba” Boisfontaine never attended public meetings. “Whether it was good or bad politically, you really just accepted whatever happened,” he said. After floodwaters inundated the area, Boisfontaine led the rebuilding of his local park when government was slow to respond.

Now his weeknights are crammed with community and government meetings.

In his first state of the city address last month, Landrieu laid the city’s problems on the table with a sobering candor. New Orleans, he said, was “in peril.” Though the outgoing administration of former Mayor C. Ray Nagin had told Landrieu that the city faced a $35-million deficit, the new mayor’s staff found that mismanaged budgeting had obscured the real deficit, which was nearly twice that.

One dramatic sign of government ineptitude: There has been no hot water in City Hall for two years.

Post-storm data affirm that this Deep South city — so long informed by the stark divides between blacks and whites, haves and have-nots — remains so today. The Brookings report shows that black and Latino household incomes are, respectively, 44% and 25% lower than those of whites.

To drive around town in 2010 is to toggle among different levels of recovery.

There are modest neighborhoods, such as the Lower 9th Ward and New Orleans East, with long stretches of half-wrecked houses and empty lots with grass pushing through cracks in concrete.

There are the high-water, high-income, high-profile neighborhoods of Uptown and the Garden District, which suffered mostly wind damage during the storm. And there’s the French Quarter, pristine as ever, beautiful and bustling.

And there is Lakeview, a newer, upper-middle-income neighborhood of 7,000 small, graceful homes laced with wide, park-like boulevards. Lakeview was badly flooded, but today it’s hard to tell it ever happened.

Among Lakeview’s residents is Sandra Mann, a divorcee who had dabbled in volunteer work before Katrina, who found herself completely on her own after the disaster. She moved from rental house to rental house while she fought the insurance companies and agonized about what to do with her ruined, two-story townhome.

She spent five days in the hospital with a nervous breakdown before deciding that the only way she’d ever get her life back was to get her home back. “At the end of August of 2006, I fixed myself a cocktail, sat on my couch in my apartment and thought, you’ve never built a house before,” she said. “You don’t know how to build a house. But you can do it. And in three and a half months, I did it.”