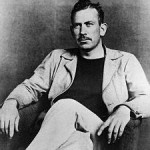 John Steinbeck would have loved the people we meet on a daily basis.

I can imagine him sipping coffee in the morning with Ms. Donna – coffee warmed on the grated fire pit in front of her deteriorating, ramshackle home. He would have helped her empty out the strategically placed pots placed throughout her house to catch the rainwater that fell through her roof the night before. He may have even brought her an old campaign sign to join the others she used in place of sheetrock to cover the gutted walls and ceilings of the house.

Then he might have strolled down to the river to hang out in the tree canopied camp with Pete and the guys – who this day are allowing a sangrita-ish concoction of multiple liquors and juices to sit and marinate in plastic gallon jugs while they roll cigarettes between hustling odd jobs in the rich folks yards.

Perhaps he’d spend a quick afternoon in the empty Cannery Row-ish factory on the river helping Pierre do some scrapping while he tried to decipher the elegant and colorful graffiti throughout the rusted premises.

Sydney, with her big eyes and her hair plaited like a little girl, would tell him of her simple dream of having her own place with actual hot water where she could soak in bubbly warmth for days and days. Between squabbles with “T” she would tell him of her days in elementary school when she used to get into fights with other girls who teased her about having a boy’s name, and how she quit school in the 11th grade to get her first, and only, job as a cashier at a Schweggmann’s Supermarket. How she loved that job!

Later, after yet another light-hearted squabble with “T”, using her quiet voice Sydney would tell Steinbeck of her brain aneurism and how she now has a shunt in her head that drains through her body and into her stomach. She would tell him of how the trauma of the aneurism has rendered her unable to read and write, how it has inhibited her ability to keep her temper from flaring at strangers, and robbed her of her ability to care for her now teenage son.

It would not take John Steinbeck long to figure out that “T”, although struggling with his own significant demons, is the loving caretaker of Sydney. “T” not only makes sure Sydney gets to her medical appointments, but helps her with all of her activities of daily living – hustling up food, keeping their abandoned apartment neat, taking out their daily waste, and protecting Sydney from herself when her temper flairs. It also wouldn’t take Steinbeck long to realize that “T” has consistently and generously shared whatever limited food, shelter, and resources he has with dozens of others as well.

In true Steinbeck fashion, though, as he related to the stories of the people we meet, he would not sugarcoat the difficult truths we see. He would not romanticize their daily sufferings:
•Ms. Donna’s tears of fear and frustrations as she shudders remembering the rats running over her last night as she tried to sleep.
•The vomiting, shakes and DTs suffered each morning by Pete and the guy’s living in the camp by the river and the wracking cough and pneumonia suffered by the frailest among them.
•The rust, asbestos, and lead that cakes every exposed inch of Pierre’s body each day as he dismantles the factory piece by piece to sell the iron for pennies on the pound to the local scrap yards.
•The vengeful gripping power of the crack cocaine, unlike any addictive substance in Steinbeck’s time (even Doc’s opium pills) that “T’ struggles with on a daily basis.

I can’t help but think that Steinbeck would be looking with shame at the fact that we are a country that is still dealing poorly with the Diaspora wrought by Katrina, that we haven’t learned much since the Great Depression or the Dust Bowl days about how to humanely and effectively work with those among us without who face daunting challenges alone.

However, I think that Steinbeck would rejoice as he witnessed Ms. Donna’s quiet joy last week as she was gently handed the keys to her beautiful, clean, apartment.

I imagine Steinbeck would give a hearty laugh and slap Pete on the back in congratulations as he successfully took the difficult steps necessary to document his income and become days away from moving off the levee into a place of his own.

I believe Steinbeck would give quiet thanks for the rapid re-housing program which will help Pierre move from the dangerous factory into his own place where he may be more successful in finding less toxic ways to earn funds.

And in the depths of my soul I know that Steinbeck, with a wink at “T”, would reach into his duffle and pull out some sweet smelling bubble bath to present to Sydney as she crosses the threshold of her new apartment next week and heads straight for the warm water to soak away some of her cares.