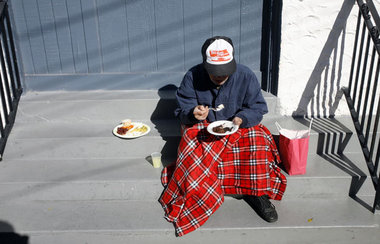 For two days, UNITY of Greater New Orleans sent out volunteers to different sites around the city and Jefferson Parish to count the number of homeless people. Martha Kegel, the Executive Director of UNITY, says that her organization does this every two years. The count is required by the federal government in order for the city to receive any support for homeless services, but, Kegel says, it’s also an opportunity to see where things stand in terms of the homeless population.

It may surprise some to learn that 75-85 percent of New Orleans’ homeless are New Orleanians, and for many, homelessness was one of Katrina’s many effects. Since the storm, Kegel says, the city’s rents have skyrocketed up 45 percent, leaving many of the lowest-income residents with no way to pay for housing. The Greater New Orleans Community Data Center states that in 2009, 38 percent of New Orleanians paid at least 50 percent of their income on housing costs. This is a larger percentage of people experiencing this kind of rent burden than in New York City. The reason behind this surprising figure, Kegel says, is that wages in New Orleans are low, and the discrepancy between the cost of housing and income for clerks, janitors and many restaurant workers is so high.

Nineteen people attended the home­less survey training at UNITY’s offices on Monday, Feb. 21. Rasonda Bell was one of those who had come out to help. Bell works at Episcopal Community Services, and she said that she found the training useful to her for her own job. When people call and her agency is unable to assist them, Bell said, “We don’t just leave people with ‘good luck with that.’ Resources change so fast, so you’ve got to be up on the game” in order to tell people where to turn for help.

At the Ozanam Inn, a cafeteria room was taken over by volunteers – one volunteer and one respondent per table – to survey the facility’s residents. For Cynthia Smothers, a BellSouth retiree, this was her second year as a volunteer. “My niece works for UNITY,” Smothers explained, “but the first year I was so moved by how many homeless there are, I knew that I had to take a stand somewhere, even if it’s just taking surveys.” While Smothers has a family connection to UNITY, she herself volunteers with Just Faith, a charitable, faith-based organization dedicated to helping those in need.

This article was originally published in the February 28, 2011 print edition of The Louisiana Weekly newspaper