The Times-Picayune: Conversion of Former Nursing Home on Esplanade Ave. Hits a Series of Snags 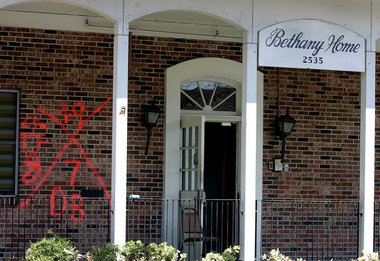 Despite a favorable vote last year by the New Orleans City Council, a coalition of nonprofit groups seeking to transform an abandoned Esplanade Avenue nursing home into 40 apartments for homeless and low-income people has run into nothing but trouble.

The council voted 4-3 in September to overrule the Historic District Landmarks Commission and allow demolition of a small rear portion of the former Bethany Homes nursing home at 2535 Esplanade. The demolition was intended to allow creation of enough parking spaces to meet city requirements.

But that by no means ended the developers’ problems at City Hall.

They had to return to the Board of Zoning Adjustments, which already had twice refused to give them a waiver on the number of off-street parking spaces, for a setback waiver. The board refused in November to grant that waiver.

In addition, Safety and Permits Director Paul May ruled in April that the project did not comply with zoning rules because the apartment complex would include “an on-site office for a case manager to provide certain supportive services to the tenants.” May said such an office “is not specifically listed as a permitted accessory use” in an RM-3 multiple-family residential zone.

The group of nonprofit organizations behind the proposal challenged May’s ruling, but the Board of Zoning Adjustments, which can overrule a decision of Safety and Permits, unanimously refused to do so in this case. The board has consistently voted against the project.

Zoning board decisions cannot be appealed to the City Council, only to the courts.

Meanwhile, the Esplanade Ridge-Treme Civic Association, which has led opposition to the project for the past two years, asked a judge to overturn the council’s decision.

Using a model known as supportive housing, a team of nonprofit groups — including homelessness collaborative Unity of Greater New Orleans, the Gulf Coast Housing Partnership and the New York City-based housing organization Common Ground — wants to turn the former nursing home into 20 apartments for formerly homeless people and 20 for low-income tenants making less than about $27,000 yearly.

Case-management services were originally to be provided at the site by Odyssey House of Louisiana, an addiction-treatment program that already has a presence in the neighborhood, but that group recently withdrew from the project.

Neighborhood opponents had specifically targeted that organization, leading the developers to change plans. Now, if the project finally is approved, Unity would manage the apartment complex, said Martha Kegel, executive director of Unity.

The opponents fear the project would bring more crime and drug use to the neighborhood, lower property values in a historic district and increase population density.

At Board of Zoning Adjustments meetings, City Planning Commission staff members often reminded the board that it was voting only on the proposed variances, not the use of the building as a whole, but testimony from both proponents and opponents before city boards has rarely stuck to the precise legal points at issue.

Advocates have touted the value of providing supportive housing for homeless people; critics have raised concerns about the future tenants and the building’s proximity to John McDonogh High School.

The case-management office at the heart of May’s ruling was intended to be located on-site so the resettled homeless people could have immediate access to services at the complex, Kegel said.

Offering such services is part of a model that was established nationally by Common Ground and has been applied in other development projects in New Orleans.

Kegel said the rejection of the case-management office raised doubts about other similar projects around the city. “This ruling would potentially threaten (other multifamily buildings) because they could be cited as being in violation of the ordinance,” she said. “This ruling can’t be allowed to stand.”

Michele Braden, the president of the neighborhood group and has led the campaign against the development, said she and her group would oppose any future action the developers take at City Hall.

“I will fight them if they try anything else,” she said.

The coalition, for its part, has accused the city of violating the federal Fair Housing Act, which says people cannot be denied housing based on race or disability.

The U.S. Department of Justice confirmed in the past that it was tracking the proceedings involving the building, and at one point it requested documents from the city.