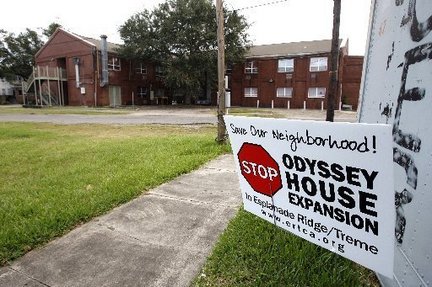 A proposal to transform an abandoned Esplanade Avenue nursing home into a 40-unit apartment complex for some of the city’s most vulnerable homeless people has stirred up virulent opposition from some neighbors, who fear the tenants would increase crime and drug use in the area and cause property values to decline.

Michael DeMocker, The Times-PicayuneA protest sign sits in a lot across from the former Bethany Nursing Homes, which UNITY of Greater New Orleans hopes to convert to apartments to reduce homelessness.

A City Council vote today could break a months-long procedural logjam over the proposed development, which has run into trouble at two city regulatory agencies.

The saga began two years ago, when the homeless-services collaborative Unity of Greater New Orleans hatched a plan to transform the old Bethany Homes nursing home at 2535 Esplanade Ave. into an apartment complex.

Half a block from Broad Street, the stately but blighted building is surrounded by large 19th century homes, the historic Degas House and John McDonogh High School.

When the property went into foreclosure, the U.S. Department of Housing and Urban Development acquired the mortgage so it could be used to provide housing for disabled homeless people.

A partnership including Gulf Coast Housing Partnership, UNITY and Common Ground, a national homeless-advocacy group based in New York, pieced together financing for the $5.5 million redevelopment from a variety of local, state and federal sources.

The plan is to introduce a strategy, new to New Orleans, under which homeless people move into apartments with normal rental agreements, but have case managers who help them find work, handle their finances and get health care. The complex also would include housing for low-income workers.

Common Ground has won awards for its renovations of several historic Manhattan hotels, and its so-called supportive housing strategy was credited with reducing homelessness in the Times Square area by 87 percent.

The partnership ofUNITY, Common Ground and GCHP is working on developing a similar project on Canal Street.

At the Esplanade complex, 20 units would be designated for disabled homeless tenants, with the other 20 reserved for low-income tenants. Top priority will go to those deemed most likely to die if they remain homeless, such as the elderly and people with kidney disease, liver disease, HIV/AIDS, or a history of hospital visits.

Onsite medical and social services would be provided by Odyssey House of Louisiana, which ultimately would own the Esplanade complex. It would hire a management company to screen tenants, sign leases and run the building, Odyssey House CEO Ed Carlson said. It also would provide round-the-clock security.

Some neighbors claim Odyssey House’s nearby clinic already creates problems for them. They blame petty crimes in the area on Odyssey House clients, and signs reading “Stop Odyssey House expansion” dot the area.

But Carlson said no one has ever shown him documentation, such as a police report, linking a crime to an Odyssey House client. He said the organization does not tolerate illegal activity.

About a dozen neighbors fighting the project told The Times-Picayune that the complex’s tenants would introduce new crime and drug use into the neighborhood, depreciate property values in a historic district and increase density in a mostly residential area.

“What they’re going to put there is so awful for the neighborhood,” said Michele Braden, who lives across the street from the building and is president of the Esplanade Ridge-Treme Civic Association. “It’s really going to bring us down.”

Her husband, Hank Braden, a former state senator, said the complex would draw an influx of mentally ill people. “They should be in real institutions where they’re regulated,” he said.

Not all neighbors are opposed to the project, though. Liza Cowan, who lives three blocks from the blighted nursing home, supports the initiative. “If there’s a project being proposed by a reputable developer who has a plan to manage it well, I think that’s an asset to our neighborhood, especially when the alternative is more blight,” she said.

Fears about the tenant mix were raised at a meeting of the Board of Zoning Adjustments, prompting the board’s chairwoman, Carla Major, to remind members they were there to vote on the complex’s parking plan, not its use. The board voted 5-2 to turn down a parking exemption sought by the developers.

The developers then devised a plan to demolish 3,000 square feet of the rear portion of the building so they could meet a city requirement of one off street parking spot per apartment. City planners recommended approval of the new plan, but the BZA rejected the modified plan. Meanwhile, the Historic District Landmarks Commission refused to grant permission for the partial demolition. The City Council today will hear the developers’ appeal of that commission’s decision.

City Councilwoman Susan Guidry, whose district includes the site, has met with both sides, but she would say little about the status of her discussions.

Looming in the background of today’s hearing is a federal investigation into the zoning board’s actions. A letter sent by the Department of Justice to City Attorney Nanette Jolivette-Brown in June said the board could have violated federal law if it denied the parking exemption based on discrimination against the residents who would inhabit the property.

Morgan Williams, general counsel for the New Orleans Fair Housing Action Center, said the zoning board acted with “discriminatory sentiment against people with disabilities” and the city must “take swift action” to correct it.

Neighbors denied their remarks were discriminatory.