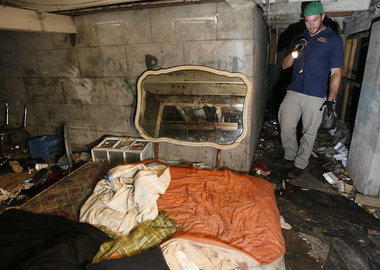 By Katy Reckdahl, The Times-Picayune The homeless population in Orleans and Jefferson parishes stands at 9,200, 70 percent higher than before Hurricane Katrina, with the largest share of people living in abandoned buildings, according to counts and estimates released Thursday by UNITY of Greater New Orleans, a collaborative of 63 social service agencies.

Despite the city’s modest size, New Orleans’ homeless population is one of the highest in the nation in sheer numbers, said UNITY director Martha Kegel, who also announced four new ways that UNITY will combat the problem.

There is some good news. Over the past two years, the numbers of local homeless decreased by 10 percent, Kegel said.

The new data also show an even greater reduction — 23 percent — in the number of people living in the most precarious situations: on streets and in abandoned buildings, emergency shelters or transitional housing.

The decrease is due partly to more affordable apartments, which “create more couches for people to sleep on,” Kegel said. But it’s also due to efforts of UNITY street-outreach teams that comb the city’s streets and abandoned buildings, where squatters with some of the most grave disabilities sleep in bedrolls.

UNITY’s agencies then help the most ill vagrants document conditions and place them on a registry to be housed, ranked by the likelihood that they will die on the streets if not housed.

Most homeless people are simply extremely poor and resolve their own homelessness without much outside help.

But for the severely disabled, it’s more complicated.

Over the past two years, UNITY has provided permanent housing to 1,989 disabled homeless people, mostly through a U.S. Department of Housing and Urban Development program that provides “permanent supportive housing,” with vouchers to pay rent and caseworkers.

UNITY hopes to house a total of 2,500 homeless people by 2013, said Kegel, who announced two HUD grants. A $1.08 million grant will house 33 more disabled people, while a $149,000 grant will improve intake and data collection at local shelters.

Since the storm, UNITY outreach workers have been shocked at the numbers of frail homeless people who had lived with family caretakers until Katrina.

Some are elderly. While the city’s homeless population, like those nationwide, consists mostly of people between the ages of 45 and 61, the proportion of homeless elderly, 62 and over, in New Orleans is four times the national average.

Dunn is severely mentally retarded, “with the mind of a 6-year-old,” as his mother often says. His mother, who is limited by developmental problems as well, said her parents died within five years of each other, when she was a teenager. She was employed once years ago, at the Charity Hospital cafeteria.

Alford’s narratives don’t always track and she answers questions literally. Asked how her family got to New Orleans from Detroit, where she was born, she said, “In my daddy’s station wagon, a Chevrolet.”

Like many disabled people, the pair have found it tough to make ends meet since Katrina pushed up rents. While a disability check is $674, the fair-market rent for a one-bedroom apartment is $850.

The pair now lives in a Central City building that houses UNITY clients. The two are inseparable, even indoors: one bedroom is empty; in the other Dunn’s twin mattress sits a few feet from his mother’s larger mattress.

For now, Dunn spends his time watching cartoons while Alford sits at the table. “I can’t watch much TV because I have cataracts in both eyes,” she said.