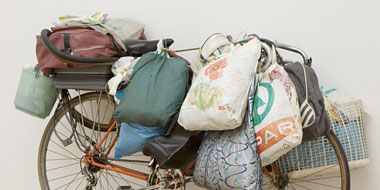 I didn’t think it was possible.  Just two days ago I saw him riding his bike down Jackson Avenue.  I didn’t have time to stop and wave him down.  I guess that was my last chance.

Mel was easily one of the three or four most colorful people I’ve met living in an abandoned building.  Actually, it was an abandoned hospital in Mid City.  That was almost a year and a half ago.  He and two other guys had the run of the fifth and sixth floors to themselves; their 5th floor patio offered one of the most spectacular views of the city skyline at night.

We’re not supposed to have favorite clients.  We do though.  Mel was one of mine.

He’s also the only client that ever scared me.  Mike and I were walking through the basement of the hospital, which was so pitch black our Mag-Lites barely seemed to penetrate the darkness.  We walked through trying to avoid the pooling water, and calling out “Hello! UNITY Outreach!”  As Mike turned a corner toward daylight, I turned back to the darkness.  Despite not being religious, I saw an apparition and felt the fear of God.  I shouted gutturally, the sound of all my breath leaving my body at once.   Mel was walking toward me out of the darkness wearing one of those headlamps that remind me of coal miners.  He was shirtless and his body the palest white.  His jeans were black, which meant all I could see moving from the darkness was his body from the waist up lit by the halo of the headlamp.  I thought it was the upper half of a human ghost floating at me.

There are two types of people when stricken by terror: yellers and screamers.  Thanks to Mel I know I’m of the former category (and that my heart is still healthy and strong).  As a man, worried ever about my machismo, I take some comfort in that knowledge.  Out of respect for Mike, I won’t tell you what category he fell into that day.

Mel was also quite possibly the smartest client I’ve met, which absolutely puts him past me on the IQ charts.  I introduced him to a reporter from the Washington Times last summer.  His first comment: “Oh, that’s the conservative paper in Washington.”  The reporter was stunned: a homeless man in New Orleans, Louisiana who preferred the Washington Times to the Post and knew the difference.

Mel was full of odd bits of information like that.  Unfortunately, he was also full of bi-polar disorder and a crack habit.

Mel was a police informant.  I’ll never forget the meeting we had between us, him and the officer he worked with on the balcony of the hospital chapel, lit by the red, orange and yellow of the stained glass.  The officer sat there looking at us, we at the officer, with Mel orchestrating the conversation.

Before we were able to house Mel, some sort of drug deal or informant operation went wrong and he was shoved off of his bicycle to land head first against the curb.  He spent over a month in the hospital, at first paralyzed from the neck down.    He gradually regained movement of his limbs, but his posture remained stooped, his hands crippled and bent in.  How he managed to re-learn to ride that bike is beyond me.

I remember the first time I visited him after he left the hospital and moved into his apartment.  He was still primarily bed ridden and I had to help him with dumping the reservoir of some sort of suction pump that was draining excess cranial fluid from his still swollen and compacted cervical vertebrae near the base of his head.  Apparently a month in the hospital without insurance was too costly for my least favorite for-profit hospital in New Orleans, and he was sent to his new home with a machine draining the base of his skull.  In some ways I guess it is fitting, as he seemed indestructible and bionic bearing the scars of a dozen surgeries and joint replacements.

Mel remained a fiery and a devout Catholic until the end.  He met regularly with the priest of the parish he grew up attending.  After each meeting, he’d bring Mike and I and his case managers a problem he wanted to work on to become a better person.  Successful or not, he tried and that’s more than I can say for most people I know.

So, here’s to Mel.  Religious or not, here’s hoping that the bare-chested, headlamp-haloed, bicycle-riding spirit of Mel is now coasting around a kinder place.  A place where abandoned hospitals do not constitute homes, where a man’s best gig isn’t serving as an undercover narcotics informant, and where the Washington Times is delivered daily.