UNITY Client Featured as a National Success Story by HUD 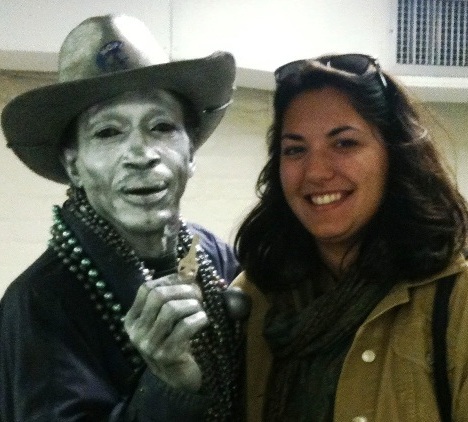 Mr. B. with his case manager, Ali Salinas. Photograph by Katy Quigley[/caption]

We are happy to announce that one of UNITY’s clients has been featured on the HUD Homeless Resource Exchange website as a ‘promising practice and success story’ of the Homelessness Prevention and Rapid Rehousing Program (HPRP). The client, Mr. B, affectionately called Silver Man because of the silver paint he dons as a street performer in the French Quarter, had been homeless for over a year when he was found living in an abandoned building by the UNITY Outreach Team. Mr. B. is now stably housed and is receiving services from his case manager, Ali Salinas, to help him become self-sufficient and remain in housing.

The HPRP Program is a Stimulus Act program that has worked to prevent and end homelessness for over 1 million people across the country since its inception in 2009. Locally, over 1,700 homeless or at-risk families or individuals have received short-term rent assistance and case management through the program, which utilizes a network of 16 UNITY member agencies. UNITY extends special thanks to the City of New Orleans, the UNITY Outreach Team, HPRP Contracts Manager Valerie Reinhard, and HPRP Case Manager Ali Salinas for all of their hard work in housing Mr. B and thousands of others like him.