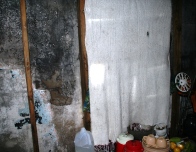 UNITY Director of Programs Angela Patterson comforts Ms. Carrie Handy as she recounts her painful story of living in a gutted house for over three years

The Abandoned Buildings Outreach Team of UNITY of Greater New Orleans held a press conference Tuesday, Aug. 24, at 10 a.m., to release the Team’s findings and recommendations from 18 months of combing the city’s abandoned buildings in search of elderly and disabled survivors of Hurricane Katrina.

The press conference was  held at the site of an abandoned building with gutted walls in which Ms. Carrie Handy, age 61, a native of New Orleans, and her elderly brother lived for years after Katrina until they were discovered by the Abandoned Buildings Outreach Team. Ms. Handy, who is disabled, has been housed since May in a safe, habitable apartment where she was placed by the UNITY collaborative.

At the press conference, the 4-member team released a detailed report, “Search and Rescue Five Years Later: Saving People Still Trapped in Katrina’s Ruins.” Three people who were rescued from abandoned buildings around the city  and members of the Abandoned Buildings team spoke about the abandoned buildings homeless crisis.