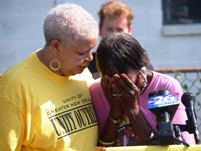 NEW ORLEANS – Homelessness in the city has gotten worse in the five years since the Hurricane Katrina, not better according to a new report by the homeless advocacy group Unity of Greater New Orleans.

The group claims there is a secret explosion of hidden homeless people, living in the more than 55,000 abandoned buildings that dot the storm ravaged landscape of New Orleans.

Carrie Handy, 61, lived in a once flooded home on Laussat Place in the Upper Ninth Ward.

“I had to board all this up from the cold,” Handy said pointing to the walls where mold soaked drywall was removed. “I had to put blankets over here to keep it warmer. I was comfortable in here. I think I did good for the three years I was in here, though. I did the best I can do.”

Carrie and her older brother Jonnie Morgan, 65, lined the walls of the gutted home with plastic, cardboard, election signs and whatever they could find.

“It’s been very, extremely pitiful,” said Morgan. “It’s been extremely uncomfortable, but as I say, we try to make it a home the best that we possible could.”

The Unity study shows there are as many as 6,000 people living in Katrina’s ruins across the city.

The group estimates about 1,500 people migrated to abandoned buildings after tent cities in Duncan Plaza and under the interstate disbanded.

According to the study, 75 percent of abandoned building dwellers are Katrina survivors and the vast majority suffer from mental illness, physical disabilities and other life threatening conditions.

A few months ago, Unity found Handy a small apartment.

Her brother however, still lives in conditions that continue to worsen by the day.

“New Orleans is a great city,” said Handy. “If the politicians would just get together, you know and take all these abandoned houses and fix them up for people that is homeless, there would be no homeless people.”

As bad as the homelessness problem has been post Katrina, Unity says it’s actually gotten worse in recent years with the downturn in the national economy and the BP oil spill.

“It’s a crisis,” said Kegel. “Just because people can’t see it, doesn’t mean that we don’t have to solve the problem.”

For many, the dream of renewal and recovery 5 years after Katrina, remains a dream unfulfilled.

“With a home or without the home, you still got to survive,” said Handy.

There were approximately 10,000 homeless people living in New Orleans before Katrina.

The Unity study shows that number has now nearly doubled to about 20,000 since the storm.