A Letter from the Executive Director: Home for the Holidays 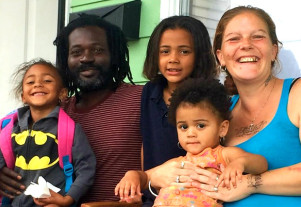 Every year, I like to write to you to tell you about a family who will be enjoying a home for the holidays because of you and other generous supporters. Last week, I met Jeremy, Lacy, and their daughters, and their story will stay with me forever.

I am so honored to be able to tell you about this amazing family who will spend this holiday season off the streets and in their new New Orleans home.

For Lacy and Jeremy, both of whom have a disability and have experienced tragedy and trauma, falling in love was the best thing that had happened to either of them.

“I never really had anyone,” Lacy told me.  Her mother “didn’t want to be bothered” with her, telling her she was “never going to be anything.” Her father began raping her when she was 5 years old.  After years of abuse, at 12 years old, Lacy wound up in foster care, and there, she told a case worker what her father had done to her.  With her help, Lacy’s father was brought to justice and is still in prison today.

When Lacy met Jeremy, she said, “It was a thing that God had done.”  Jeremy was also without a family, as his mother had died from sickle cell anemia.  And they became a family.  Together, they have three beautiful daughters—Ja-Nyi who is 6 and in the 1st grade, Iy-Ana who is 4 and goes to PreK, and London who will soon turn 2.

But the family fell on hard times again.  Lacy and Jeremy are both disabled and were surviving by collecting Social Security, but the renewal paperwork is tricky and difficult to understand.  Lacy wasn’t able to follow the protocol to renew their disability payments, and suddenly they had no money to pay the rent.

Lacy, Jeremy, and their little girls were put out on the street.

Even after all that had been done to her as a child, Lacy always told herself, “much worse things could have happened to me.”  Even living on the streets, she felt lucky to have a loving partner.  She and Jeremy put the two younger girls in a stroller to sleep in between them on a bench, with the oldest girl lying across their laps.  Jeremy slept little, wanting to watch over them.  Then, he pushed the stroller all day.  Lacy took the children into convenience store bathrooms and bathed them as best she could from the sink so that they “would look like something.”  She was never going to make her children feel like her mother made her feel.

She spent every day in fear that the authorities would come and take her children away from her.

Once, Lacy said that a “nice lady cop” gave her $20 because she said her children were hungry.  Lacy went into a nearby takeout window and used the money for food.  The police officer came back and confessed that she watched Lacy to see what she would do with the money.  Lacy had done what she said she would—she fed her girls.

Lacy said that every night she had the same prayer, “God, keep watch over me and my kids.  I know you’ve got something better for me.”

One night last month, the family was sitting in the grass on the roadside.  The children were covered with insect bites that were becoming infected.  She said, “we were sitting there wondering where we would go.”

Lacy said when she saw the van she thought, “Lord, I knew you were going to come through.”

After staying in a transitional shelter for some time, they now, thanks to you, have an apartment — their own permanent home.  Because of Lacy and Jeremy’s disabilities, they also have a case manager who visits them there regularly to ensure that all is well.

4-year-old Iy-Ana likes to show visitors around her home.  She leads them by the hand to each room, explaining who sleeps where.  They have some furniture from UNITY’s warehouse, and Lacy is keeping the place spotless.  Iy-Ana especially likes her family’s tidy kitchen and fenced backyard where she and her sisters can play.

To some, Lacy’s story seems tragic—abused and neglected all of her life, forced with her children onto the streets due to her disability.

To Lacy, her life is a beautiful love story that now has a happy ending.

You gave her that happy ending. I am incredibly grateful to you.

Will you help more homeless families like Lacy’s find a home by Year’s end?

Please make a gift to UNITY to continue this critical work.