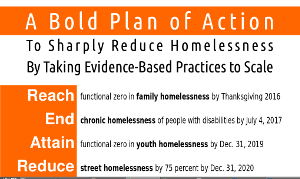 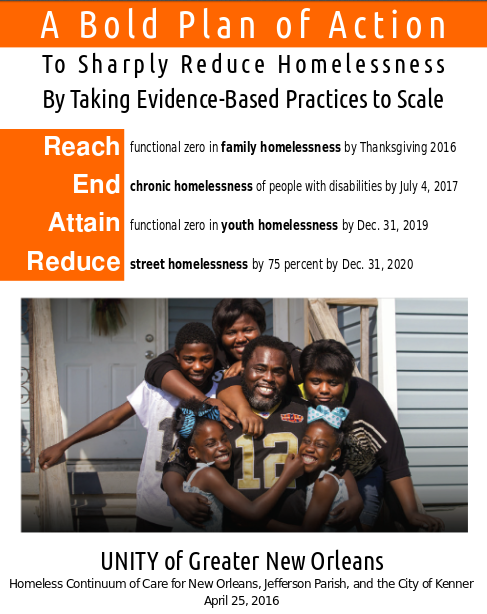 On Jan. 2, 2015, in response to First Lady Michelle Obama’s Mayors Challenge to End Veteran Homelessness, the UNITY Homeless Continuum of Care of more than 60 agencies partnered with New Orleans Mayor Mitch Landrieu to make New Orleans the first city to effectively end veteran homelessness. Working closely with the VA, HUD, the Housing Authority of New Orleans, and many other partners, our community permanently housed the 227 homeless veterans in our backlog of cases, many of whom had been sleeping on the streets for decades.

The partners were not content to rest on our laurels afterward. Recognizing that even veterans who have never been homeless may be at risk of becoming homeless because veterans have relatively high rates of poverty and disability, we collaborated with the VA, the City, HUD, the Volunteers of America, Start Corp., the Hope Center, VIA LINK, local shelters and other government and nonprofit partners to set up a Rapid Response System for Veterans to scour the streets and shelters every night looking for homeless veterans and rapidly re-housing them in apartments with case management services. This is how we maintain the Functional Zero standard, defined as permanently housing newly homeless veterans within an average of 30 days of finding them on the street or in emergency shelter. In the past 16 months of maintaining Functional Zero, our community has never exceeded the 30-day standard, housing an additional 202 newly homeless veterans since Jan. 2, 2015.

Maintaining functional zero is hard work and requires constant vigilance, but it is well worth it to know that in New Orleans and Jefferson Parish, we can quickly intervene to stabilize anyone who risked their lives so that the rest of us did not have to. No longer will veterans be left to suffer in homelessness in New Orleans and Jefferson Parish.