A happy story to brighten your day (and you can create more!) 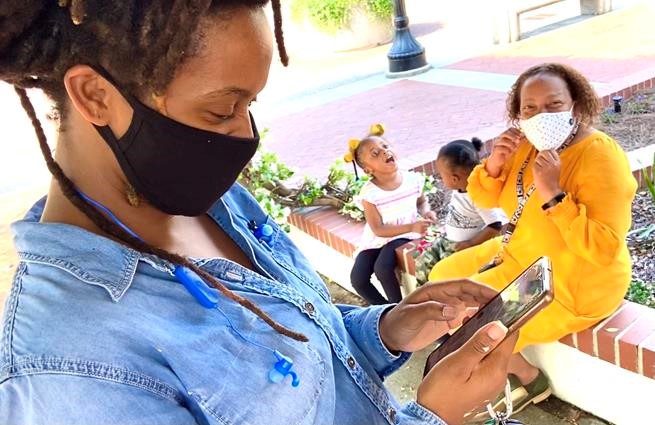 “I felt like the world had turned its back on me,” said Kibreeya Jones,
as she tried to keep her toddlers safe and warm.

She tried to get her supervisors to schedule her to work only while her kids were in pre-school.

But she couldn’t tell them that her children would be alone in the car if she worked nights or weekends.

I have a joyful story to share with you about a young mother of two who now has a new lease for an apartment and, really, a new lease on life.

Like so many other New Orleanians, Kibreeya Jones, 24, lost her hospitality job last year when the pandemic hit, shuttering most of the city.

Already, nearly 600 people have fallen into homelessness as a result of the pandemic.  With your help, teams from UNITY of Greater New Orleans will be working hard to house those people throughout this fall and winter.

Soon after her workplace shut down, Kibreeya found that she couldn’t pay her bills, so she moved  in with family members, along with her two toddlers: one-year-old Ayaan and three-year-old Ayeerbik  — her own name spelled backward.

But when she felt like her children’s safety was at risk, she moved immediately to her car. A few months later, as winter weather set in and temperatures dropped below freezing, she knew they had to get inside.

Most days, she felt a heavy weight pressing on her. Some days, she was paralyzed with anxiety. She felt like she was slipping into a deep depression.

“Mommy, what do you need? A hug?” Ayeerbik would say.

Kibreeya didn’t want her daughter feeling responsible for raising her spirits. So she went to see a counselor at a healthcare agency. But at the front desk,  the receptionist asked for her address. She hesitated. It was obvious that she had no address to give. So the agency connected her with Ty Richards, family coordinator at UNITY of Greater New Orleans.

Ty moved quickly to place the family into the Salvation Army family shelter.

“I could see the sadness in her eyes,” Ty said, as Kibreeya told her about how she felt like she was failing her children, because she couldn’t provide for them. “I felt like I couldn’t be a good parent for my babies, because I don’t have, financially,” she told Ty.

Kibreeya’s two toddlers: son, Ayaan, who is 1; with daughter Ayeerbik, who is 3.

She told Ty that she had landed a decent retail job and that she was fond of the people there. Everything went smoothly during the week, when her children were in preschool.

Ty resolved to find a solution to that ongoing dilemma. “Something about Kibreeya tugged at me,” Ty said. “So I told her not to worry, I had something else for her.”

Before she could even think about finding a new job, she needed to find a place to live where she and her two toddlers could feel safe. Kibreeya wanted something smaller, where she and her children wouldn’t feel lost in a sea of rentals.

Ty did not disappoint. She found what Kibreeya describes as the perfect apartment in a quiet setting. “It’s just the right size and place for us,” she said.

UNITY provided rent assistance and furniture and got them moved in. The kids requested a few specific toys, including a fuzzy stuffed lamb for Ayaan.

Then, Ty discussed jobs again with Kibreeya. Tell me about your talents, she said.

Kibreeya opened her telephone and showed Ty hundreds of drawings. Turns out that Kibreeya had been sketching regularly since childhood. In middle school, her gifts were so evident that she became certified as a gifted and talented student.

But after graduating from high school, art seemed like a hobby, something she did for herself. For her, her life’s passion was entirely divorced from her work.

“My jobs were always just to pay my bills,” she said.

Kibreeya Jones, 24, now has a job that makes her happy and can provide for her and her two children.

Soon, Ty brought her some job applications, for work in the art sector.  “Those talents of yours are heaven-sent,” she said.

Kibreeya applied for and was hired by the Reunion Shoe Company, where she spends her days splatter-painting shoes and t-shirts and has fallen in love with the supportive workplace atmosphere.

She now looks at her struggles as part of her past. “I came a long way,” she says.

As UNITY launches a campaign this fall to house 600 households that were pushed into homelessness by the pandemic, we need your help to create more success stories like Kibreeya’s.

I am asking for your support for UNITY’s vital work of housing the most vulnerable people in the New Orleans area.  Our vision is that — with your help — our community can emerge from this crisis with fewer people struggling in homelessness, not more.

Please help us provide holistic help to families like Kibreeya’s, so that they can get back on their feet, despite the toll the pandemic has taken on their lives.

Please consider a gift to UNITY of whatever amount you can afford.

P.S. I am so grateful for your compassion for vulnerable people. Thank you for joining this important cause to ensure that every New Orleanian has a home.