A look back at 2012: decimating the “Tenacious Ten” list 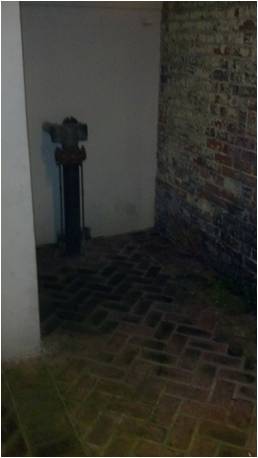 A newly empty doorway, where one
of UNITY’s clients used to sleep.

There is one simple vindication for all the daily frustrations of being an outreach worker — the disjointed, the systems of broken systems, the personal ravages of the street of those living on it.

This last blog of the year pays homage to all the empty doorways, benches and abandoned buildings throughout New Orleans — places that were once home to some of our hardest-to-house homeless people.

This year, we decimated our “ Tenacious Ten” list – those people who have, sometimes for years, resisted our best efforts to house them.

We still have our holdouts, but it’s time to celebrate our successes:

•     The empty doorway above represents four years of collective outreach.  The elderly gentleman who called these bricks home was so paranoid it took two years just to get his name.  There weren’t any neighbors advocating for him and the surrounding businesses never took stock of the old man and his tattered blanket.  The only people aware of his feral existence was our group of outreach workers and the occasional late-working lawyer of the law office he slept in front of.

•     In front of a fast food restaurant serving thousands daily on one of the busiest streets of New Orleans, an elderly woman sat stoic in a dingy festival chair.   In her late xities, she refused all placements– emergency, transitional,  family re-unification and otherwise.  Five years of freeze plans, a few hurricanes (graciously weathered in the nearby corner bar) and the brutal humidity of New Orleans summers barely dented her over-dressed resolve for street habitation.

Through luck, timing and focus; she too is housed.

•     Another case was the developmentally disabled man who roamed the hospital district in secondhand suits until finally collapsing in exhaustion in front of a heat grate outside a shuttered VA hospital.

The morning waitresses of a famed 24-hour dinner get the assist on this one.  His 15-year odyssey of chain-smoking  and block cutting ended when they wouldn’t give him his morning eggs anymore until he worked with UNITY.  Sometimes it takes a village (and an admirable Western Omelet).

•     Another highlight was the 68 year-old man, wrists covered in hospital bracelets and pants caked with feces.  His 15-year jaunt with vascular dementia, Mad Dog 20/20 and leaving hospitals AMA (Against Medical Advice) ended when outreach convinced a clinic doctor that he really needed a nursing home.  After a brief, 15-hour day sitting in the firm plastic chairs of the urgent care clinic in the Medical Center of Louisiana at New Orleans, his homelessness ended with the incomprehensible signature of a disinterested and reluctant internal medicine specialist.  Not done with passion or conviction. But housed.

I’ve always said that the moment a chronically homeless client gets their keys is anti-climatic.  Usually, a client takes the keys, walks around the apartment, mutters an intangible thank you and then you leave. The glossy photos of cute clients smiling joyfully and holding their new keys are few and far between.

Returning to your cluttered and over-crowded office carved out of a utility closet, you flick the dried mouse turds off your desk and wonder want just happened.   Years of rapport building, advocating, collecting mountains of documentation and case-planning abruptly end.   You move onto your next client.

Sometimes, the only thing you have to show for your work is one more empty doorway.  Honestly, that’s more than enough. Part of the UNITY outreach team — Travers Kurr and Mike Miller — by a once-occupied doorway.