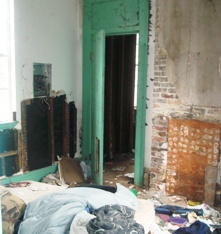 An abandoned house on Laussat is home to Johnnie Morgan.

“I have no electricity. I have no air conditioning and it’s very hot and air comes through the window and gives a little comfort through the blessings of God and I just make due and do the best,” Morgan said.

This gutted house one of an estimated 55,000 abandoned houses, Unity of Greater New Orleans says has become shelter to the homeless.

Unity also says it’s hard to say how many homeless are living in abandoned buildings, but it believes anywhere between 3,000 to 6,000.

Until recently, this it was home to his sister Carrie Morgan-Handy as well.

For the Morgan siblings it was survival, kind of like camping since there were no utilities.

“No refrigerator, no stoves, no television. I didn’t watch a TV for 3 years so that’s the only thing I hated because there was no electricity,” Morgan-Handy said.

When Carrie and Johnnie moved into the abandoned house, it was gutted. There were no walls. They made due with garbage bags and political signs.

“It was just for warmth to keep the air out, the cold out,” Morgan-Handy said.

But unity somehow found their way in and by searching for homeless, it was answer to Carrie’s prayers.

Unity was able to help Carrie leap from this unfit property to what feels like a palace in St. Claude.

Unity is exploring several solutions, like turning abandoned housing into housing for homeless and creating a safe haven for homeless with mental illness issues.