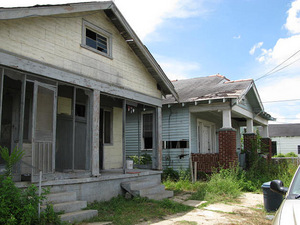 Four years after Hurricane Katrina, New Orleans has regained about 75 percent of its pre-storm population, and there are signs of economic progress. But although New Orleans is rebuilding its arts and tourism venues, including a $165 million theme park in New Orleans East, a shadowy second society exists.

According to a recent study, 124,000 people have received nearly $8 billion in federal grants to help rebuild their homes. But others are barely making it. Since Katrina, homelessness in the city has doubled to an estimated 12,000. Some are in shelters, but about half continue to live in the city’s more than 65,000 abandoned buildings.

Grace Bailey lives in the remains of a four-room house with two other squatters not far from Tulane University. They sleep on tattered mattresses or on the floor. Part of the roof is missing, so it has rained inside, and now the leak has spread to Bailey’s bedroom.

“I had a two-bedroom house and a bath-and-a-half round there,” she says. “And to be here, you know, it’s depressing. It’s really, really depressing.”

It’s late at night, but still hot and sticky. Bailey and her fellow squatters have rigged up electricity. Unlike most, they have a fan, some dim lamps and a small hot plate on the floor where noodles are cooking. There is no water, but Bailey says they fill up buckets from neighbors’ sinks to flush the toilet and to clean themselves.

Before Hurricanes Katrina and Gustav hit, Bailey says, she had a job at the shrimp factory. But she lost the job and then her home.

The Most Disabled, The Most Vulnerable, The Poorest

Walking through darkened abandoned buildings with broken glass has become a fulltime job for Mike Miller.

Since December, armed only with flashlights, Miller and Shamus Rohn with Unity of Greater New Orleans have searched more than 1,300 vacant buildings for evidence of squatters.

As Miller walks through a building on Canal Street that was once the City Hall annex, he says he’s afraid of opening doors. A young woman was found dead inside last month. On the third floor, there are mattresses, newspapers, empty liquor bottles and huge piles of trash — evidence that squatters were there.

Martha Kegel, executive director of Unity, says that so far this year the group has found 270 bedrolls and other signs that people are camping out in empty buildings.

“And it should come as no surprise to anybody that the people that are suffering the most, year four after the storm, are the most disabled, the most vulnerable and the poorest,” she says. “Right now, we have 850 people on our supportive housing registry. Those are people who are actually on the street in abandoned buildings or in homeless shelters who have severe disabilities. And they’re of such severity that they can’t remain stably housed unless they had both the subsidy and the case management, very importantly.”

Kegel says the majority of those in abandoned buildings lived in New Orleans before Katrina. One third got FEMA assistance, but when the money ran out, they ended up on the streets.

Another problem is the cost of housing. New Orleans’ rents are up about 40 percent since 2005. And housing advocates say many who work in the tourism sector and others with low-paying jobs find it difficult to afford anything.

“There’s not enough affordable housing,” says Allison Plyer, who is with the Greater New Orleans Community Data Center. In partnership with the Brookings Institution, she puts together an annual assessment of the recovery.

“We had rents before the storm that averaged about $500, and now rents for just a studio apartment are close to $800,” Plyer says. “So folks who maybe have the same wage levels — or slightly higher than they did perhaps pre-Katrina — they just cannot afford the rents.”

Plyer says housing prices will remain higher because the cost of insurance and other housing expenses have gone up. Also, the city’s big four public housing complexes were demolished.

They are being rebuilt, but no apartments are available yet. Last week, Mayor Ray Nagin told a congressional panel studying housing that much of the federal money allocated for the city’s recovery had not yet reached New Orleans.

Back on the streets, the Unity outreach team stops by to check on Ludmilla Damon, whom everyone calls Jaz. She wasn’t displaced by Katrina, but moved to an abandoned building after the storm to rescue animals. Damon got into drugs, and that’s how she ended up on the street, she says — first under a bridge, then in vacant buildings and now in a four-room apartment.

Damon, 42, says she wants to find a job and start over.

“It’s nice to be able to roll over on your bed and know that you’re not rolling over because you heard a noise in the hallway that you might have to get up and investigate — and you know the police aren’t coming in to raid,” she says. “It’s really nice, creature comforts people take for granted. I mean, once you get ’em again, I mean, you never forget how wonderful it is.”

Unity is launching a new program in October paid for by federal stimulus funds. It will provide short-term rental and job assistance for about 2,000 households in New Orleans — those who are already homeless and others who are most at risk.