Disabled and homeless, he relied on people’s kindness. 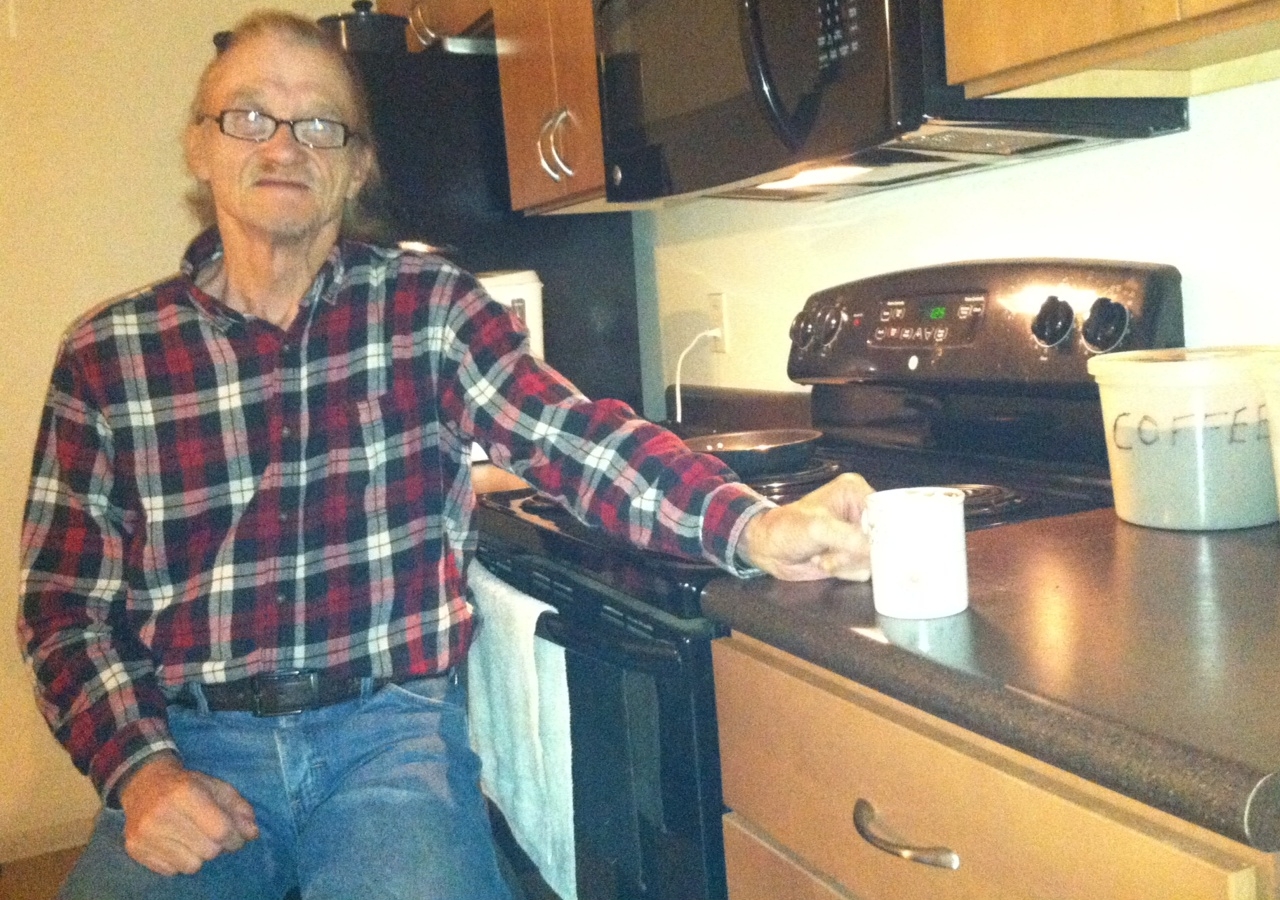 But now, with support from UNITY, Mr. Dawson is housed and is learning to do things himself.

This blog post is by Emily Leitzinger, a case manager at UNITY’s award-winning Rosa F. Keller Building, a UNITY-owned apartment community for the working poor and for disabled people rescued from homelessness.

On a cold night in 2010, I gave my dinner leftovers to a homeless man, who lived in a small entryway in front of a closed restaurant.  A year later, two days before Thanksgiving, I met the same man, Mr. Dawson, at Canal and Camp streets.  But this time, as a case manager for UNITY, I was in a position to help him with much more than a night’s worth of food.

He remembered me and we set off together to search for a home for him.

Although Mr. Dawson was unshaven and wearing unwashed clothing, I persuaded a landlord with a fully furnished efficiency apartment to let him move in.  On Thanksgiving Day 2011, he signed his lease and his landlord brought him a turkey dinner.

Mr. Dawson had grown up in a state-run facility for severely delayed youth, where he learned some basic life skills. But because he lacked a supportive family to return to, he graduated at the age of 21 and became homeless.

Over the course of the next 20 years, Mr. Dawson traveled with different groups through Texas, Oklahoma, then to Baton Rouge, eventually leading him to New Orleans.

Due to Mr. Dawson’s lack of understanding and inability to function successfully on his own, he has always relied on the kindness of strangers.  He often talks of people giving him directions, buying him coffee and meals, and providing him with much-needed rides.

His reliance on strangers wasn’t always positive.  While on a course to his future home, he was robbed of his backpack holding his false teeth, his identification and his bank ATM card (allowing access to his monthly Social Security benefit checks).

Over the years, I suspect that he has asked many New Orleanians for directions. During the time Mr. Dawson spent in his new efficiency apartment, he often got lost on his way to grocery shop and go to appointments.  He was unfamiliar with the area and would often end up by instinct back in the CBD area or, “Downtown” as he referred to it.  Sometimes I would find him, lonely and confused, and bring him home.

Once, on a trip Downtown, we decided to head to the Social Security Administration to reapply for benefits, because Mr. Dawson was sure that he had been cut off when his bank card was stolen.  Much to our surprise, the funds had been accumulating in the back account in Texas!  I couldn’t imagine that a man who had lived penniless for so many years may have actually have been able to afford a life off the streets.  The Social Security Office deemed Mr. Dawson over asset limit because of this account and he had to repay the overpayment.

After he had done so, I assisted him in reapplying for benefits.  He was quickly approved, which meant access to the insurance he desperately needed to manage his seizures with medicine and regular healthcare.

In the early summer of 2012, UNITY’s Rosa F. Keller Building opened, and I became a case manager there.  The Keller was only a few blocks from Mr. Dawson’s favorite stomping ground!

I wanted to get Mr. Dawson into a more supportive, familiar environment. I believed that if he moved into the Keller, he would be less likely to leave his apartment and get lost. The apartment would also provide Mr. Dawson the intensive case management services he desperately needed to learn how to prepare simple meals, clean house and better take care of himself.

Mr. Dawson moved into his beautiful new apartment just a month shy of his 57th birthday.

When I look at Mr. Dawson, I see a man who has weathered many years but now has hope.  He becomes more self-sufficient every day.  Since moving into the Keller Building, Mr. Dawson has diligently paid his rent.  He is now working part-time at a fast-food restaurant only a block away from the entryway he had once called home. When he comes home, he loves to make a fresh pot of coffee, made using his own coffeemaker, in his own apartment.

On Thankgiving this year, Mr. Dawson cooked his own turkey!

We need your support to continue UNITY’s work, housing our community’s most vulnerable people. To give a tax-deductible contribution to UNITY, please click here.