Eking Out A Life In New Orleans’ Abandoned Homes 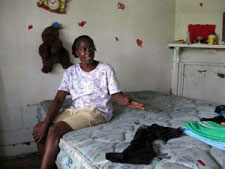 They are all but invisible: abandoned people eking out a meager existence on abandoned New Orleans property. No electricity. No running water. They are barely making it.

In the darkened kitchen, the floor is littered with filthy clothing, rotting food, empty bottles and cans. Part of the roof is missing, so now it rains inside. The kitchen floor is soft and sagging. Even the squatters say they’re afraid of falling through. Alondis Jackson, 42, says she has lived in abandoned homes in New Orleans for at least two years. She has a hard time remembering how long it has been. Most people know her only as Peaches.

“I been here awhile,” she says. “I been here too long. I just can’t get a job.” Peaches spends her days panhandling to get enough money to buy food. She says she lost 20 percent of her brain in a car accident some years ago. Now she has seizures.

Before Hurricane Katrina hit, she lived in an apartment with a friend. But that friend moved away, and Peaches ended up on the street. In the living room of the shotgun-style home that she has claimed, a tattered mattress sits on the floor.  The moisture and mold has set in. The walls are stained; Peaches has been trying to wash them. “You can see how I have been wiping the walls down, getting the smut off the walls to make it look presentable,” she says with a sigh. “Still, it’ll never be home.”

Peaches is one of about 6,000 people living in abandoned homes and buildings four years after Katrina hit. On the day we meet, she is wearing clean clothes. Some who see Peaches regularly have donated their old clothes to her. Nearly every day she peruses garbage cans for treasures.

“People throw away a lot of good stuff,” she says. “There are a lot of things that people put in the trash.” She found a clock that works. Sometimes she finds food. Above the bed is a teddy bear she rescued. Peaches says she’ll keep it until she finds a child she can give it to — someone who will love it.

She uses what looks like the dining room as her bathroom. A clear plastic bin sits atop a yellow wooden box. It serves as her sink and toilet. She hauls in bottles of water and uses a bucket to take a cat bath and to wash her clothes.

Peaches keeps a Bible near her bed and a meat cleaver underneath the mattress. She says that’s in case someone tries to enter her house during the night. But she says she’s not really afraid. She latches her door closed with a bungee cord at night.

“I don’t do no wrong to nobody, and I ain’t got to worry about nobody coming here and doing wrong to me,” she says.

As I leave Peaches, I notice a gallon of bleach and a half-dozen household cleaners lined up against one wall. An unopened jar of mayonnaise sits atop a wooden fireplace mantle, looking strangely out of place. But everything here is out of place.