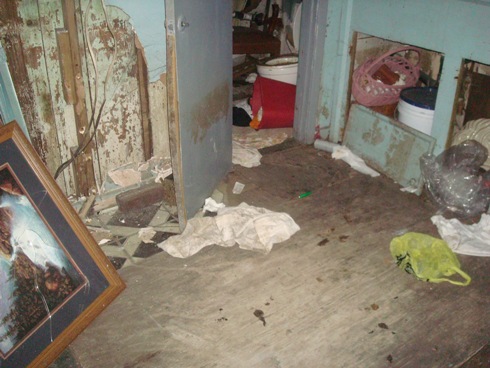 While progress has been made, New Orleans still suffers from a lack of affordable housing

“Hey guys, you home?” he calls out while standing outside a desperate looking building. “It’s Mike from Unity.”

When he gets no answer, Miller, Shamus Rohn, and Katy Quigley walk to the other side of the property to find an open entrance. Armed with only flashlights, they make their way through the dark, empty building.

“Homeless outreach,” says Rohn, raising his voice to make his presence as well as his reason for being inside known.

No one answers as the trio moves through the large commercial building. They think it may have once been a meat plant, but it’s hard to tell in the dark and hard to know when so many buildings in New Orleans sit empty.

In the back, they find tidy bedrolls and other signs that someone has been living inside. A picture of a dog has been fastened to a stark wall, a small attempt to make the place home.

It’s about 10 p.m., and the squatters are not around. The team members make a note to check back another time, and when they do catch up with them, they will lend a sympathetic ear, try to find them appropriate housing, and offer any assistance that they can.

UNITY of Greater New Orleans, a nonprofi t working with New Orleans’ homeless, has taken the bold step of sending workers into the city’s abandoned buildings at night to reach the homeless who are hidden from view.

“No other American city is dealing with anything on this scale,” says Martha Kegel, Unity’s executive director. “We’ve got over 60,000 abandoned residential and commercial properties, and our most conservative estimate is there are about 3,000 people living in them.”

The saddest part is that most of the people that Unity is finding were stably housed before Hurricane Katrina and its toxic floodwaters ruined their homes and defiled their city.

Unity workers have rescued a man in mid-suicide and discovered a group of seniors, the oldest 90, living in an abandoned garage with holes in the roof.

“The search and rescue from Katrina, five years later, is still not finished,” says Kegel.

Kegel easily pulls numbers and facts about the city’s homeless and affordable housing from memory. An attorney, she ran a legal services project for the homeless before taking over Unity’s top post in 2003. She was preparing to adopt a baby and thought the job change would provide her a more regular schedule. It is a rare case where she was wrong. The last few years have been anything but normal.

Before Katrina, there were about 6,300 homeless individuals on any given night in New Orleans. Today, the homeless population is estimated to be nearly double that at 11,500, including people in transitional housing and those about to be evicted from their homes or discharged from institutions with no place to go. Charity Hospital and many of the outreach centers that served the poor and mentally ill remain closed.

In the years right after Katrina, large homeless camps emerged around the city. The leaders of Unity and its collaborative organizations, who aren’t easily shocked, were horrified as camps grew in size each week. If homelessness were measured like hurricanes, it would have been a Category 5.

Unity housed 457 people in eight months on sheer adrenaline, she says. Now, they have a more daunting challenge of scouring abandoned buildings for the homeless. About 98 percent of the people they find have a significant disability; 27 percent are women. Nearly all are happy to see the Unity workers. They’ve been waiting years for someone to come by and help, says Kegel.

On the same muggy June night, Rohn, Miller, and Quigley search one desolate building after another, making their way across shaky floors, over discarded building materials, and through puddles of water left by a heavy morning rain. They find mattresses, shoes, beer cans, and other signs that people have been around.

They stop at a school that was something back in its day but is now a skeleton of what it once was.

About two hours after visiting the first building of the evening, Rohn is driving through a quiet neighborhood when Miller spots someone entering a house that was believed to be empty. They double back and meet a soft-spoken man who has lived in New Orleans his entire life. The house belonged to his dead uncle, he tells them.

Standing on the porch, the workers gather the information they need to begin a case and provide him the help that he may need. The man lets the strangers look inside the home. In the front room near the door, two men sleep undisturbed. They work during the day and rest at the house in the evening.

Before their long night is through, the Unity workers drive to another brokendown house with “gas off” painted on the front. Inside, Rohn finds two more men.

Another outcome has been an increased level of interest in housing policy, with state and local governments wanting a greater role in the housing discussion, says Evelyn Brown, senior vice president and manager of the Gulf program at the Local Initiatives Support Corp. (LISC).

Still, few can say enough has been done, and there’s concern that money will run out and public interest will ebb when a large amount of work is still left.

The 2005 storms damaged more than a million housing units in the Gulf Coast region. In New Orleans alone, 134,000 housing units—70 percent of all occupied units—suffered damage, according to the Greater New Orleans Community Data Center.

The center estimates that there is a lack of affordable housing or subsidies for at least 20,019 households in New Orleans.

Housing production isn’t nearly enough to meet this demand, with 7,754 federally subsidized units in the pipeline as of last October, mostly LIHTC units, and another 2,666 units in the planning stages, according to Housing Production Needs: Three Scenarios for New Orleans, a report issued by the center and The Urban Institute last fall.

“The biggest obstacle for developers has been the massive scale of this disaster,” says Sen. Mary Landrieu (D-La.).

In other disasters like a tornado, communities see a few neighborhoods damaged while other areas remain intact. That was far from the case in 2005.

“Entire neighborhoods were impacted, and it took months for many homeowners or businesses to return to assess the damage,” says Landrieu. “In general, we have also had to deal with lower population levels in some areas, which have created recovery challenges for businesses and developers operating in these areas.”

Now, as a result of the Deepwater Horizon oil spill disaster, many of the same areas face further obstacles to their recovery, says Landrieu.

Jack-o’-lantern effect A few months before the fifth anniversary of the storm and levee breaks, the city is a riddle, with time seeming to move at different speeds depending on where you stand. Some parts of New Orleans are forging ahead while other parts are frozen in time. Rebuilt homes sit next to empty lots that sit next to boarded-up houses still bearing the tattoos painted by rescue teams.

This patchwork is known as the jack-o’- lantern effect, says Liza Cowan, a program officer for community revitalization at the Greater New Orleans Foundation, which is in the midst of a five-year, $25 million housing initiative.

She drives through the city, pointing out key affordable housing projects that have risen since the storm and others that are under construction.

Much of the planned recovery was based on a 2005 economy, but the national recession dealt a big blow to the efforts. Developments using LIHTCs, the nation’s biggest affordable housing production program, took longer to close while others lost their investors. Environmental and other issues took longer to sort.

Although there’s been a good deal of progress, a new visitor would be struck by how much work there’s still left to do, admits Fred Tombar, senior adviser to Department of Housing and Urban Development (HUD) Secretary Shaun Donovan.

“It speaks to just how severe and impactful the damage of Katrina and Rita was,” the New Orleans native says, adding that it’s hard to have a litmus test for where the recovery efforts should be when nothing like Katrina has ever occurred.

The block where Tombar grew up has yet to fully recover. He recently saw a school bus make its way through a familiar neighborhood and read it as a sign of life returning to normal.

One of the biggest challenges for affordable housing developers right now is the looming deadline for projects fi- nanced with GO Zone credits, according to Tombar. An estimated 6,000 affordable units are in jeopardy of missing the Jan. 1, 2011, placed-in-service deadline.

Donovan has been working with Treasury Secretary Timothy Geithner to get Congress to extend the deadline to give stalled projects a shot at being built.

Another HUD priority is to move from recovery to revitalization, says Tombar. “Will there be parks for the kids in the complex to play in, grocery stores for residents to shop in, lasting jobs that people can rely on to meet the rent demand?” he asks. “Those are the things we’ve been focusing on.”

Since taking office in 2009, Donovan’s team has taken key steps in the Gulf, including moving people into the Sec. 8 housing voucher program and being assertive about where Community Development Block Grants are directed, says Sheila Crowley, president and CEO of the National Low Income Housing Coalition.

At the same time, she’s quick to point out that public housing remains largely missing in the city and other affordable housing has yet to be rebuilt. Recent reports showed 958 families in Louisiana and another 197 in Mississippi still living in Federal Emergency Management Agency trailers, with advocates convinced the Mississippi number is actually higher, says Crowley.

A number of familiar names have stepped up their efforts. Habitat for Humanity has built 302 homes since Katrina, including Musicians’ Village in the Ninth Ward. The group was building just 10 houses a year before the hurricane but now has a goal of 50 a year.

LISC and Enterprise have opened offices in New Orleans. Volunteers of America, which had a big presence in the city with more than 1,000 units before Katrina, is busy rebuilding many of the units it lost and is one of the most active developers. New Orleans-based HRI Properties, a specialist in adaptive-reuse projects, has done about 10 deals since the storms.

New developers have also entered the scene. The Domain Cos., led by Tulane University friends Matt Schwartz and Chris Papamichael, has built three prominent mixed-income properties in Mid- City. Providence Community Housing, a faith-based nonprofit has risen in the wake of Katrina to build several projects, and Realtex Development Corp. out of Austin, Texas, has completed nine developments in Mississippi in the last five years.

Still, there’s more affordable housing that needs to be built and more low-income families that need to be housed. Just then maybe Unity workers can end their search.