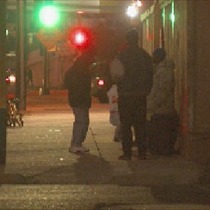 “I should’ve stayed in Memphis. At least I had a house there, everything I needed. Now I’m asking why,” Melton said.

Melton works and goes to school. She said she and her children were recently evicted. With threats of freezing temperatures looming, she needs shelter for her family. But the city’s shelters are filled to capacity and she has no money.

“Maybe we’ll just sleep in the car. Thankfully I have gas. It’s just so hard because I work and go to school, I do my best with everything I do to take care of my children. Rent is just so expensive and money is so low,” Melton explained.

Salvation Army Director of Social Services Karen Jackson says her organization offers three free nights, but can only house 210 people. “We try to take as many people as we can. We currently are full. However, we try to make space for additional people if we do have the space. All the facilities for women and children are full,” she said.

UNITY Executive Director Martha Kegel said over 50,000 units of affordable housing were destroyed by Katrina. As a result, New Orleans now has one of the largest populations of unsheltered homeless in the nation.

“On any given night in New Orleans, there are over 5200 unsheltered people, mostly living in abandoned buildings but really living in every neighborhood,” Kegel said.

This effort has to be collaborative, according to Kegel. She said government, the faith-based community, the business sector, non-profits, and private citizens must work together in order to beat homelessness for good.

For Melton the mayor’s long-term goals leave little comfort. “The next ten years, why can’t we do it now? Why do we have to wait?” Melton asked.

Kegel said they have a solution, but homelessness can’t be solved overnight. “Housing is the solution. Permanent housing, coupled with services targeted to that person’s needs,” she said.