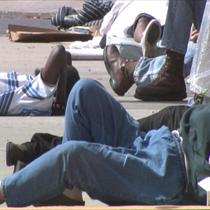 New Orleans – Carrie Morgan-Handy, 61, tries hard to handle what life serves up, so instead of living on the streets when she returned to New Orleans after being displaced in another state after Katrina, she ended up turning a gutted and abandoned 9th Ward house into her home.

But without work, it was not new construction, instead Carrie was in a house filled with studs and a roof she could see through. Still, she persevered, living on the streets was not an option.

“I had do for myself, the best I can do and I did it,” Carrie Morgan-Handy said during an interview with FOX 8 News.

The smell of five year old mold is still palpable in the house. The walls really aren’t walls in the truest sense.

“I made it, I did turn it into my home, that’s what I did, but I had to start from scratch,” she said.

Her 65 year old brother Johnny Morgan moved in with her a year or so ago.

“She did her best to provide a home for both of us,” he said.

When Johnny arrived the two of them found old campaign signs and whatever else they could muster to cover the studs. Today the unusual coverings remain. “Bulletin boards, boards of the government ah through garbage bags used to plaster the walls,” Johnny Morgan proudly spoke of, as he stood on the porch of the house in the 2900 Block of Laussat Street.

It has no water, no electricity, still Carrie was able to steel her emotions.

“I had to use like candles, lamp oil and then I had to like cook on portable stove that run by propane, I was comfortable up until my brother had a stroke and I just lost it.”

She said she stayed in the house from 2007 until this past April, and then she was rescued for Unity of Greater New Orleans, an advocacy agency which works to relieve the homeless from the perils of living without permanent shelter.

Johnny Morgan is still awaiting placement. “It’s not all that comfortable but its home for now. It’s hot.”

While crying she said, “I’m a strong survivor, it was a living nightmare when Katrina hit here.”

Housing and health care advocates said there are thousands of others just like Carrie and her brother. In fact, Unity estimate that between 3,000 and 6,000 people are now living in New Orleans’ abandoned buildings five years after the storm. And the group said homelessness has nearly doubled since Katrina.

Unity’s Executive Director Martha Kegel said, “New Orleans also has the highest rate in the country of vulnerable people having to live in those abandoned buildings because of the extreme shortage of affordable housing.”

And mental health experts will tell you that because a chunk of the homeless population is suffering from either drug or alcohol addiction or mental disabilities they resort to living in abandoned properties because frankly they don’t realize there’s people out here to help them or they are too paranoid to accept such help.

Dr. Coenson recalled one encounter after locating someone in an abandoned property. “I remember one fella who’s in an abandoned school, he was trying to panhandle during the day so he could get beer for his girlfriend who has cancer because she was in pain, I mean it was an incredible story.”

Carrie Morgan-Handy said she is not ashamed of how she was forced to live. She said people fall on hard financial times, especially in post-Katrina New Orleans. But she said she is grateful she finally received help.

Ironically, the abandoned home Carrie lived in was next to where she grew up.