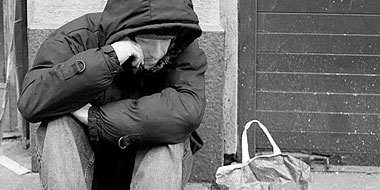 He smells like a homeless old man, this 4-year-old boy.  He has oozing bug bites on his arms and legs.  His eyes are beautiful and engaging as he looks up eagerly for interaction.  He doesn’t understand that I am copying his application for housing that he may not get — he just wants to name the colors of the pages flowing through the machine.  His mother standing anxiously by understands.  He points pudgy little fingers that remind me of my own son’s at that age and I struggle with wanting to hug him and my own revulsion at the puss and dirt.

Later I see him in the parking lot with his arm around something that given his bouncing eager walk must be a remote control car or some such toy that he will show his friends.  No, that’s just my fantasy for him.  I see that he is proudly holding, for his mother, a heater meal that is given to the homeless.  I know that he will take it back to eat in the abandoned house where he lives.  The woman’s walk is in contrast to her son’s, for she walks weighted under shame, mental illness, and addiction, clearly loving her son but so inadequate in meeting his needs. My coworker ’s eyes are wet because the boy has asked his mother if she is sad again when he sees her crying as she tells their story.  Brandi says that we have to get the mother and child into housing now, but I can hear in her voice that she is afraid I may disagree that they should be the next to go.  Brandi thinks I will say that the documentation of disability won’t meet federal standards, that I will argue that this woman and child are not the most vulnerable of the more than eight hundred other disabled homeless people on our registry who are also desperately waiting for housing in a program earmarked for disabled homeless people.  We are so short-staffed and poorly funded and the process of getting someone into housing is so complex and time-consuming that we can select only six or seven people for this housing each week, and then the process of ending those seven people’s homelessness will take many weeks more.

But the bug bites and the smell and the naming of colors have shaken me as they have Brandi, and for a moment it doesn’t matter who is the most vulnerable in terms of who is the sickest and most likely to die.   For this child and his mother, there will be smaller deaths each day as he sleeps in danger, as he scratches at the bugs, as he feels his mother’s depression and learns over and over in ways I do not know that the world is unsafe and sad.

And then I think of the chronically homeless man, perhaps breathing hard from respiratory disease or jaundiced from an alcohol-damaged liver or in pain from throat cancer or psychotic and depressed.   Is he too dirty and too old to get this kind of sympathy?  He may be angry and obnoxious from years of seeing himself in the eyes of the likes of us, and we won’t be willing to see his pain, ripened and foul, not fresh and innocent as the boy’s.

Mostly, I am just furious because of the impossibility of making the right decision.  We fight regularly amongst ourselves about who will get the next housing voucher, who will get out of the heat or the cold, who will have a door to lock against assault or rape, who will have a shot at living better and longer.  We yell and snipe at each other because we have no other place to land our anger and we know we have to face the question over and over, “When will you help me?”

The old man and the boy merge for me.  I can’t look at the old man without seeing a child, an adolescent, a young adult — who perhaps did not get what he needed to learn and prosper, or worse, suffered trauma that we cannot know, and along the way lost what was rightfully his – his human dignity.