His Eyes Said He Didn’t Believe Me: A Thanksgiving Blog 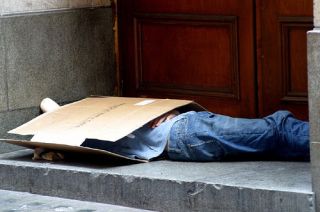 His sleepy eyes said he didn’t believe me.

It was almost 1 a.m. and Lamar was lying on a piece of cardboard, with late night traffic speeding 20 feet above the light blanket that was covering his slight frame. The traffic noise, Lamar’s soft voice and my own hearing challenges necessitated Lamar patiently, but listlessly, repeating pertinent information several times. As the multiple facets of his situation finally emerged — debilitating brain disorder from birth, an untreated immune deficiency disease, prior hospitalization for mental illness — it  became very apparent that Lamar was in grave danger of dying on the street.

Angela Patterson, our Deputy Director whose heart of gold shines through her face, stood with me in the dark night as I gave this man my most solemn promise that we would help him get connected to specialized case management services and that we would help him get housing. But his eyes told me everything he didn’t verbalize: he didn’t care who I was or who Angela was and he did not believe me. Neither hostile nor angry, his eyes were more alarmingly hollow and hopeless. How many years of broken promises led to these bleak unbelieving eyes?

As we walked away, my promise to help hung in the night air like an ethereal echo, with no real substance. To Lamar it was just another well-meant, but empty, assurance. I knew that the burden was on me to follow through on my promise. And I also know that with Lamar’s multiple medical, mental health and substance use challenges, it would take a team to really pull it all together.

The first challenge was finding Lamar again. The next day I returned several times to the space where he was sleeping. I found his cardboard and the thin blanket, but no Lamar. Mike Miller, Travers Kurr and Clarence White — my coworkers on the Abandoned Building/ Night Outreach team — returned at night, and no Lamar. Throughout that week and into the next we searched in vain.

While the search for Lamar continued, Angela began laying the groundwork for his swift transition to housing services, and coworker Demetria Phoenix concentrated on expertly managing very limited resources so that necessary respite in the form of a hotel room could be secured once we found Lamar. As the days ticked by, however, I began to despair of finding Lamar again and, almost more importantly, I feared adding another layer to Lamar’s learned hopelessness.

Almost a week and a half later, I was driving in the general vicinity of where Lamar was lying that first night and saw a group of men gathered. While I dared not to hope, I pulled over and, thankfully, Lamar was among the men! I opened the passenger door, reintroduced myself (we all look different in the daylight), asked him if he would be willing to gather his things and ride with me a few blocks to UNITY’s outreach office. He picked up a brown coat (his only possession) and got in my car.

That afternoon, because of the exceptional legwork of UNITY’s entire Welcome Home outreach team, we were able to work with Will Baum, director of UNITY’s City Shelter Plus Care program (a federal grant through the City of New Orleans providing long-term rent assistance tied to ongoing case management services), and complete all the paperwork necessary to get Lamar approved for Permanent Supportive Housing. We were able to make a next-day appointment with Jacob Rickoll, a wonderful case manager at NO AIDS Task Force, who committed to walking with Lamar through the labyrinth of medical and social services he will be need to stay healthy and stably housed, and (thanks to people donating to UNITY) checked Lamar into a local hotel where he would have a safe, clean, and pleasant place to rest until all systems were cleared to get him into an apartment of his own.

The following Thursday – after a quick visit with Joe Heeren-Mueller at UNITYs Warehouse where Lamar chose a small number of furnishings and comforts for his new home – I helped Lamar move his few belongings into a beautiful little light-filled apartment! After we walked through the doorway, Lamar stood for a long moment and surveyed the small kitchen, bath and bright living area. When he turned back to me, Lamar slowly lifted his apartment key above his head and gave me a smile that was so big that the previously saturation of hopelessness was totally erased from his eyes.

Lamar is just one of the many, many vulnerable men and women that the outreach team spoke to one recent night who are now either successfully housed or deep in the process of being housed. So many people are responsible for the successful housing of any one individual, I was reluctant to start naming names as I wrote this blog. I am SO incredibly thankful to the entire talented Welcome Home outreach team who perform the outreach and paperwork necessary for all of the Lamars we encounter. Generous groups and organizations from throughout the area continue to prepare a daily meal for the men and women who are so disabled that they must stay in a low-cost hotel for respite until housing is secured.

I am full of gratitude for the Rebuilding Communities team who provide a multitude of technical and arduous tasks to ensure safe, healthy housing for the most vulnerable people we meet, the Homelessness Prevention and Rapid Rehousing Program (HPRP) teams and case managers who work with so many of the men, women and families we encounter on the streets and abandoned buildings, and for our partner organizations that provide Permanent Supportive Housing with case management services throughout the area. The emergency, transitional and day shelters in the UNITY network assist immeasurably as they not only provide needed services, but also avenues to re-connect with our clients when we have difficulty finding them again after a late-night intake process.

As was once pointed out to me, while outreach workers may arrogantly consider ourselves the ‘heart and soul’ of UNITY, the Canal Street office is the ‘bread and butter’ of UNITY – securing, managing and transparently reporting on the funds and resources necessary to back up late night promises. So, in addition to their leadership, advocacy, and affordable housing development roles, I thank all my coworkers in UNITY’s Canal Street office.

And of course, I am so appreciative for the individuals, foundations, government funders and groups – including UNITY’s Board of Directors — who give of their time, talents and treasures to ensure we have tokens, meal cards, and sleeping bags for those in the process of getting housing, as well as sheets, can openers, and furniture for those who are moving into their new apartments.

The last thing Lamar said to me as I left him in his new apartment was: “Don’t forget about me.” As you can tell, I won’t, and I thank all of you for providing UNITY with the personal and financial resources to remember all of the Lamars and to keep promises made in the wee small hours.