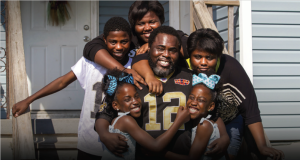 The UNITY collaborative has driven down homelessness by 85 percent since Katrina by housing families like the Newtons, who sought UNITY’s help after elderly relatives died in the storm, leaving the young family with no one to turn to.

When his family became homeless, Dyrick Newton, 43, would park his car outside a 24-hour restaurant, so that his five children could run in and use the bathroom if they woke up in the middle of the night. As his children slept, heads leaning on shoulders, sitting next to boxes containing all of their earthly possessions, Newton often sat in the driver’s seat, hoping for help and
thinking back to a different time.

Before his diabetes got so bad that his kidneys failed. Before his eyes began to fail, rendering him legally blind. Back then, he had never doubted his ability to work hard and provide for his family.