Housing a Homeless Father with a Shattered Vertebra 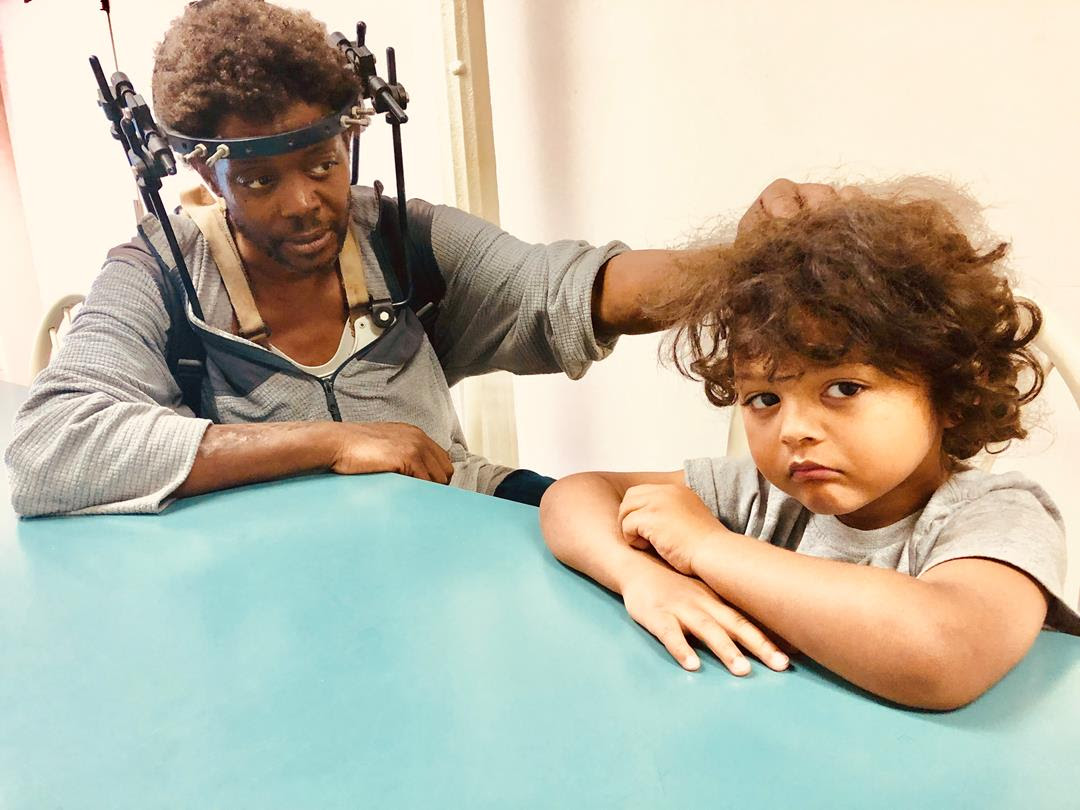 Norman Carter fell off his bicycle and crushed a critical spinal vertebra, but had to delay a series of surgeries because he had no one to care for his toddler son, Elijah. The two will soon be housed, thanks to the UNITY collaborative.

Sometimes it is impossible to believe the strength that we see every day. Homeless parents taking care of their children, despite all odds.

Norman Carter, 50, hasn’t been able to work since he was put into a halo brace — a metal box connected directly to his skull with eight metal screws. During that entire time, he and his little son have been homeless, sleeping mostly in a backyard shed.

Sleeping may not be the right word. Because Carter would go into the shed with his toddler son, Elijah. He’d wrap his baby boy in a blanket and hold him the entire night.

To make sure the two of them were safe, Carter often catnapped upright, holding his son, with his metal head brace leaning against a wall. “I made sure that he had something to eat and drink and that he slept comfortably,” said Carter. Many times that meant that Elijah ate but his father went hungry.

A tragic accident from which he hasn’t been able to heal
More than a year ago, his pantleg had caught in his bicycle’s chain, causing his bike to stop short. Carter fell back on his spine, crushing a critical cervical vertebra.

He got up, thinking he was just bruised. For the next month, he worked on construction sites as usual, until he started losing his strength. By the end of the month, he was admitted to a hospital, suffering from complete paralysis. “I couldn’t stand. I couldn’t pick up a toothbrush,” he said. “I would think that I was saying something a certain way, but the words didn’t come out correctly.”

As his condition improved, doctors put him in a halo brace and scheduled him for a series of surgeries. Sadlly, he had to cancel all the surgeries after his son’s mother was arrested. “I had nobody to watch Elijah while I was away,” he said.

A growing crisis of homelessness
During the past year, UNITY and our partners have moved hundreds of families and individuals from the streets and shelters into their own apartments. Because of the acute shortage of affordable housing in New Orleans, growing numbers of people cannot pay the high rents and are being pitched into homelessness every day.

UNITY needs your help to turn this crisis around, by joining in our work to provide necessary housing and services.

Not the life he’d expected for him and his son
Carter hadn’t expected to live this way at age 50. He graduated from a well-known local Catholic high school, attended three years of college, and had worked both construction and office jobs.

But last winter, instead of going to work, he found himself shuffling local streets with Elijah, asking bystanders for help. On nice days, the two of them would sit on an empty stoop or in a park. Carter would work with Elijah on his ABCs. They’d count together. They’d go through the flashcards Carter carried in his backpack with pictures of animals, colors, and numbers.

Then, on a cold day earlier this year, Carter walked with Eljiah to the UNITY of Greater New Orleans offices. He wanted to iron out the identification and paperwork needed to register Elijah for pre-school.

That day, Carter had a bad, raspy cough. Elijah was sick too. A UNITY outreach worker asked where he was staying. He told them about the shed. That night, outreach workers came to visit them at the shed and brought the two of them to UNITY’s family shelter.

Caring for each other, in a safe place
Elijah now puts on a little backpack and goes to Head Start every day. Carter’s surgeries are now rescheduled. “Things will get better real soon,” he said.

When Elijah gets home, he plays with some of the shelter’s toys, then puts them away himself, because his dad can’t lean over to pick them up without severe pain shooting up his spinal cord. Elijah also reaches underneath the bed and gets the shoes. That’s his job. After they eat, Elijah carries the food bowls to the sink. That’s his job too. Despite his age, he’s determined to care for his father, like his father cares for him.

Then, safe under a solid roof, this little family of two fall asleep together  — supported, with your help, by UNITY.

To help house Mr. Carter, little Elijah, and our other most vulnerable homeless neighbors, donate what you can to UNITY by scheduling in advance or donating on Tuesday, May 7th before 11:59 p.m., GiveNOLA Day: https://www.givenola.org/index.php?section=organizations&action=newDonation_org&fwID=3178

New Orleans’ affordable-housing crisis is driving more and more families and individuals into homelessness. We sorely need your help to turn this crisis around. With a gift of whatever you can afford to UNITY of Greater New Orleans, you will make the greatest impact possible in reducing homelessness for the most vulnerable people in our community.

Thank you so much for your compassion for the New Orleanians who most need your help!

P.S.  Your gift is sorely needed. If you want to find other ways to get involved, send us a note and we’ll send you UNITY’s just-released report: Crossroads: Will New Orleans Move Forward or Backward on Homelessness? We’ll also send the report to all of our GiveNOLA donors, along with updates on Norman Carter and Elijah, as they move into an apartment and move forward with their lives. Thank you from the bottom of my heart for your commitment to people who truly need your help.