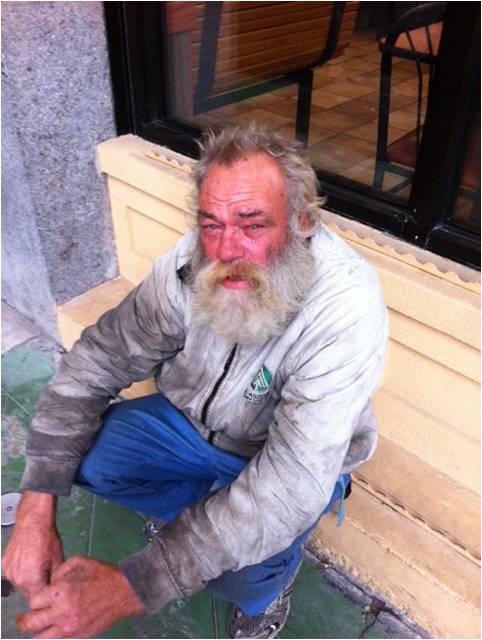 Sometimes I have trouble explaining what I do for a living.  When I say I work with the homeless, people often search for an appropriate response.

Usually I get: “So what exactly does that mean?”

People in our community confront homelessness daily as they traverse their daily routines of work, school, and home.  I have no doubt that everyone wants to do something, to acknowledge the humanity sprawled on the sidewalk or huddled under a tattered blanket.  Sometimes we give a dollar or two.  Sometimes we lie and say we don’t have any change.  In a country of so much privilege, we wonder how someone can fall so low and become so desperate.

Yeah, I’m a social worker.  Often I’m also a psychotherapist, a substance abuse counselor, a realtor, a pharmacist, a taxi driver, an EMT, a parole officer.   Sometimes even a cop.   Mostly, though, I’m just a nephew, brother, or grandson.

The picture above is my Uncle Jesse.  He’s not my literal uncle, that’s just his name.  He’s been Uncle Jesse since I found him sleeping under a wharf outside the French Quarter or on his wet piece of cardboard behind the ferry terminal.  He was Uncle Jesse when we visited him in the hospital, stood next to him in homeless court, and introduced him to his new landlord.

We’ve been a lot to Uncle Jesse; a blog post can’t do the work justice.  I just hope a picture will do.

The “before” picture on the top is my old friend the day we started assessing him and beginning the process of housing him.  The “after” pictures, below,  show Uncle Jesse and me standing outside his apartment, at the moment he was told he would get his disability from Social Security.  The “after” pictures represent six months of work, dozens of appointments, mountains of paperwork and connections to services.  Most importantly, these pictures are proof of the healing power of a home.

What I do is not about homelessness.  It’s about working with our sickest, most vulnerable brothers and sisters.  That’s how we end homelessness. 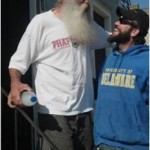 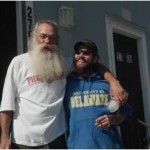