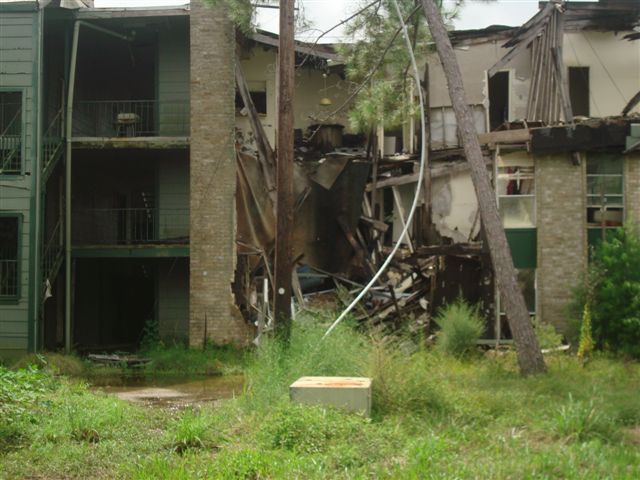 Searching for squatters in an abandoned apartment building

We surveyed an abandoned apartment complex this week. A story ran in the newspaper with neighbors complaining that the complex in question was teeming with both vermin and squatters. Fortunately, this distinction means that squatters and vermin are still two different things in the mind of the general public, a distinction for which I am glad.

Apartment complexes are different than regular neighborhoods, and not just for the obvious reasons. One major difference is that in the post-Katrina milieu of broken renters’ rights and inadequate recovery aid for people who needed to get back and reclaim their belongings, the poorer classes of our community were disproportionately more likely to never make it back and never recover their belongings. Regularly, we walk into a unit, stepping on drywall or plaster that has crumbled from the ceiling, and notice newborn-baby pictures and graduation photos, and even the occasional Polaroid of homemade pornography. Hey, approve of the activity or not, it’s all signs that you’re walking through some sort of bizarre time warp and into the remnants of someone else’s life, a life that’s never been completely regained. This is the experience we had in all 276 units of the complex.

In another we found a three-foot stack of police reports dating to 2001 in a spare bedroom that also contained hundreds of fitness magazines. This is possibly the apartment and storage room of a former police officer who kept records of her work.

Occasionally, you see something more unique, a sign that someone made it back in town and tried to re-establish communication. You see a wall beside the door for unit 121 on which someone wrote a three paragraph letter to “Mom” letting “Mom” know he is alright, leaving the new phone number and email address at which “Mom” can reach the author, and finally the request that “Mom” bring “Pookie” along with her.

This particular complex had something more unique than we usually find. It was the plans and diagrams for a “Hurricane Relocator“ on the walls of unit 275. It is drawn across an 8 by 10 foot section of the living room wall in the four colors of crayon that chain restaurants tend to offer to children between the ages of 4 and 8 in hope that coloring a placemat will keep the child from disturbing other patrons. The diagram is full of what sounds like high-level physics jargon, among them a reference to plasma, which I remember to be some odd state of matter outside the typical three and likely to exist only in the laboratory (clearly, I didn’t do well in science). A crude diagram of the earth in blue crayon shows radians emitting from the earth’s edges, clearly indicating the redirection of some sort of energy (maybe that’s the plasma being sent into outer-space?). The name Paul Owen appears elsewhere on the wall, possibly the name of the engineer who briefly inhabited this space while trying to figure out how to prevent such waste and catastrophe from occurring again. While at first look the wall resembles the works of many a psychotic client, it vaguely invokes Leonardo da Vinci’s diagrams for helicopters from 500 years ago, and no one accuses him of being crazy.

Maybe Paul Owen will be a famous engineer one day, having helped envision the Hurricane Relocator. The only question regards where Mr. Owen would choose to relocate hurricanes headed toward the Gulf South. While walking through the remnants of 276 different lives upended in just this one complex, I know I wouldn’t wish this devastation on any other community.