Mr. Griggs, a US Navy Veteran of 15 years, is finally home! 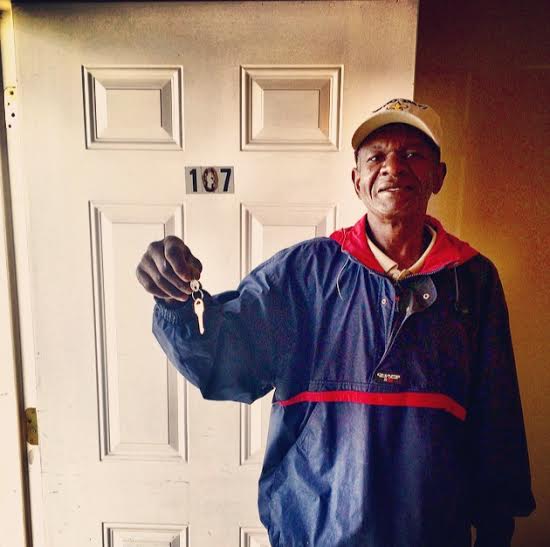 This is Ray Charles Griggs, Sr. I encountered Mr. Griggs two weeks ago while doing intake at the Ozanam Inn homeless shelter. Mr. Griggs is 63 years old and served in the U.S. Navy for 15 years with an honorable discharge. While talking with Mr. Griggs, he explained to me that he has been in and out of homeless shelters since 1989. I explained the Veterans Initiative of New Orleans to Mr. Griggs and he was eager to help me make sure he was prepared and able to move into housing.

Since the first day I met with Mr. Griggs, he made sure to stay in contact with me and provide me with all the documentation needed to get him permanently housed. Earlier this week, we finally had all the federal documentation required to place him in the Ozanam Inn Permanent Supportive Housing Program, a partnership between Ozanam, UNITY, Metropolitan Human Services District and HUD that provides rent assistance and case management services to permanently house disabled homeless persons. Mr. Griggs explained that he was worried about his health and old age sleeping in various shelters. He was tired of being homeless and was ready to get back on his feet and take care of himself.

With hesitance and not much faith in us, Mr. Griggs began to doubt that we would be able to provide him with what he would need. I, along with my UNITY colleagues Laniker, Brandi, and Pam, as well as Gail from The Ozanam Inn, were able to persuade Mr. Griggs to believe in us and take a leap of faith. I am proud to say that Mr. Griggs moved in to his own apartment in Gentilly today. He will have case management assistance from the Ozanam staff visiting him in his home. Thanks to all of us, Mr. Griggs is finally home.