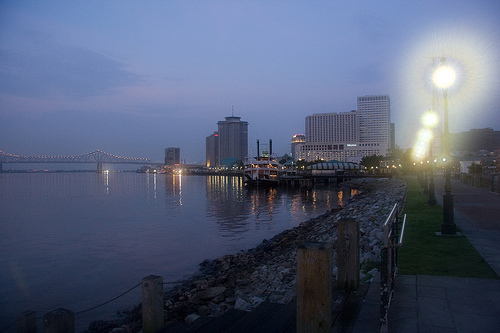 I can personally verify Mr. Sullivan’s homelessness going back 13 years.

When I first landed in The Crescent City I used to work at a bar on South Peters Street. It was in the Warehouse District before the area became an address or a destination; before the condos, boutique hotels and art galleries. Back in 1998, the neighborhood was a hodgepodge collection of vacant cotton warehouses, abandoned row houses formerly holding the offices of river shipping moguls long past expired, and The Big Easy’s version of Skid Row. Sure the neighborhood had impinging gentrification. A few years earlier another transplanted northerner, Emeril Lagasse, hung his own shingle a few blocks away and single-handedly invented the genre of celebrity chef. It was a dicey real estate speculation at the time, a world class eatery casting shadows over the street dwelling denizens of New Orleans.

Mr. Sullivan was no customer, but he was a regular. As a baby faced 18 year-old pulling the graveyard shift dispensing libations and brews to the service industry crowd, I had bigger concerns than the guy who slept out back by the dumpster. As I pushed my last inebriate out the front door, twisted a hundred year old door locked and un-capped my first beer of the night, Mr. Sullivan moved his cardboard into the doorway. With a wave and a nod, Mr. Sullivan did his version of a door stop. With the sun peeking rays over the city and the birds chirping their chorus greetings from the trees, I would quietly finish my duties of stocking beer, cleaning glasses and counting money. Leaving through the back, I would occasionally slide a sandwich or go-box of food to the gentleman now soundly asleep across my front door. This went on for several years.

I’ve always liked this time. It’s the temporal ambiguity, the point when you don’t know if it’s night or day. It’s when the avenues are deserted; street lights are on but unnecessary, the red horizon promising to explode into light. I’d peddle my bike uptown, sometimes catching breakfast before my morning classes at Tulane and other times headed for a blissful and well-deserved morning sleep.

When I left the joint on South Peters, I didn’t stop tending bar. I just moved around the corner to another watering hole. I didn’t stop seeing Mr. Sullivan either. Years went by. I graduated Tulane, re-enrolled, picked up a master’s, Katrina, post-Katrina, had a child, bought a house, etc. The neighborhood changed and evolved. We got older. Mr. Sullivan’s short hair is now dusting gray and his friendly face is worn and weathered. I feel it too, having surrendered to the grey strays that poke through my now unshaven former baby face.

We ran into Mr. Sullivan a few weeks ago. He was hobbled from a fall, a fluorescent pink cast enclosing a broken ankle. It was time. It’s been time.

I was expecting a little more push back from my co-workers to get him approved. Apparently they were moved by me and Mr. Sullivan’s intertwined biographies. He got the keys to his apartment last week.

It’s a little bitter sweet though. 13 years is a long time to darken a doorway and I can’t help but feel it shouldn’t have taken so long to get this man off the streets. It kind of seems like that solitary ride through that time when you can’t tell whether it’s the end of a long night or the start of a new day. I guess you kind of have to embrace the ambiguity of the job, of time and, perhaps, of life.