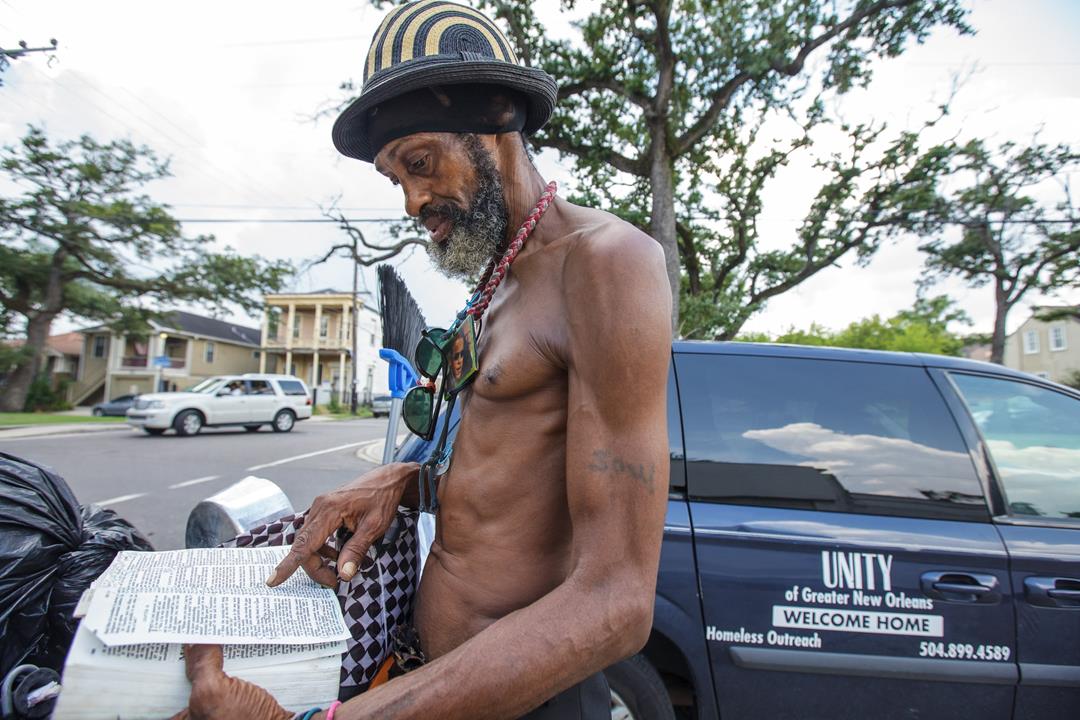 The UNITY we are today is able to house more chronically homeless people like Manuel Justin. After Hurricane Katrina, UNITY reinvented itself to respond to an explosion of homelessness. This summer, a New Orleans partnership led by UNITY further finetuned the way our teams approach and house New Orleans’ most vulnerable people.

Manuel Justin, 62, was recently housed after being homeless for half of his life. He is one of a subset of chronically homeless people described as “hard to house” because they resist efforts to go inside due to severe mental illness.

But Mr. Justin might not have been housed if UNITY of Greater New Orleans hadn’t re-invented itself after Hurricane Katrina and then fine-tuned itself again recently a national campaign that aims to end chronic homelessness in the United States.

In the years following the 2005 levee failures that flooded 80 percent of New Orleans, UNITY saw an explosion of homelessness. Two sprawling and squalid camps downtown made national headlines as they continued to grow despite UNITY’s best efforts.

So UNITY, a collaborative of 60 member agencies, changed its approach. We forged street-outreach teams that went to where homeless people were, instead of waiting for sick and vulnerable people to come to an office and request services.

In the face of the overwhelming need for housing, we also worked developed vulnerability assessments and establish a registry that ranked people for housing based upon who was most likely to die without it.

That post-storm ingenuity, bred of necessity, is now helping continuums of care in other cities, which are consulting us as they create their own street-outreach teams and registries.

UNITY didn’t do this work alone. With other advocates and our government partners, UNITY helped to form a PSH program, by lobbying for housing vouchers from Congress. We partnered with Community Solutions and adopted a CS model to create the first mixed-income PSH buildings in New Orleans.

Last year, the initiative opened its first 60 apartments at The Rosa F. Keller Building, which won national acclaim for its architecture. In February, we will cut the ribbon on 42 more units in Central City, at the Dr. Everett and Melva Williams Building. Next summer, we will open 109 more apartments at our flagship site for veterans, located in a serene three-building campus of brick buildings on Canal Street.

This summer, to house vulnerable homeless people more quickly, UNITY coordinated a campaign partnership of federal, state, city and nonprofit partners for the “200 Homes in 100 Days,” part of the national 100,000 Homes campaign.

In the end, the New Orleans partnership blew past its original goal, by housing 244 people during the 100-day timeframe. The partners found that they were able to house vulnerable people three times as fast by targeting resources more efficiently and eliminating barriers to housing.

To build on the success of that campaign, the New Orleans partnership created “500 Homes for the Holidays.” It too is an exceptional success. UNITY and its dedicated partners have continued to house chronically homeless people at the same rate and will reach 500 before Christmas.

It now seems certain that the partnership will eliminate chronic homelessness in New Orleans by August 2015, the 10th anniversary of Hurricane Katrina.

That goal will be a triumph for the general New Orleans community, which will no longer have to worry about seeing their disabled neighbors living on the streets, suffering in homelessness.

With every person it houses, the New Orleans partnership sees the importance of its work to the city’s most vulnerable people and their loved ones.

Justin’s daughter, Nicole Carthan, doesn’t live in New Orleans, but she desperately wanted to know her father was off the streets for the holidays. She was a small child when he suffered a mental break and she hated knowing that her father was homeless when everyone else was celebrating with their families. “I used to feel horrible at Christmas, because my father wouldn’t let me help him,” she said.

She sent her father a Bible, which he kept close to him. Her extended family told her they’d long ago quit trying to convince her father to come inside.

But Carthan still held out hope. So for several months this year, she worked closely with UNITY’s outreach team. At key moments, an outreach worker called her and handed her father the telephone. Each time, she was able to convince her father that he should complete the paperwork or take the help he’d been offered.

She heard that her father had been housed as she prepared for her college graduation. So recently, she sent him a framed graduation photo, which Justin displayed prominently in his apartment.

“I’m so proud of you,” he told her recently by phone.

“I’m so happy you’re inside, Daddy,” Carthan said. “I’m so glad you let UNITY help you.”

To support UNITY’s work with a tax-deductible contribution, click here.