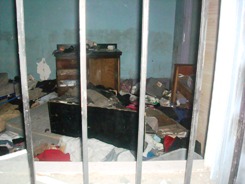 NEW ORLEANS – For the past year and a half, the non-profit group UNITY of Greater New Orleans has sent search teams into the more than 55,000 abandoned buildings around the city. They estimate that as many as 6,000 homeless people are living in Katrina’s ruins. Seventy-five percent of the abandoned-building dwellers are Katrina survivors, and the vast majority suffer from mental illness and/or physical disabilities.

Yet one of the search team members, Shamus Rohn, can see a silver lining.

“If this is a place where homelessness doubles, five years still, following Hurricane Katrina, and people are still coming back, maybe that means there’s something really special about New Orleans that still is attracting people.”

The group calls for increased funding for mental health services, shelters and caseworkers, as well as increased assistance for middle- and low-income homeowners who are still laboring to rebuild houses.

The search teams found that the people who are still, in effect, “trapped” in the ruins of Katrina are older, more frequently disabled and sicker than the average homeless, Rohn says.

He warns that the Crescent City must move carefully with its ongoing recovery.

“A lot of people want to tear down blighted buildings, and I entirely understand that. But if we move forward with eradicating blight without taking care of those who are currently inhabiting those buildings, we’re going to end up with large encampments on the street again.”

With its 55,000 abandoned buildings, New Orleans is now the most blighted city in America, according to the study.