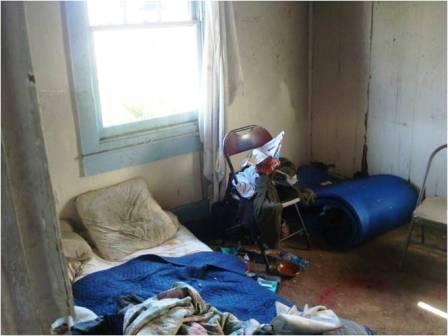 While Sheila was lying in her scavenged bed in an abandoned apartment a man came in through the door that no longer has a lock and he raped her.

Sheila is already approved for housing. She has already completed the maze of information gathering, verification and documentation.  She was days away from safe, decent housing and she was raped. Conditions in which these women live and are victimized in.

After the sexual assault she was threatened with being physically assaulted if she told anyone.

While I hesitate being so repetitive and graphic for a blog, rape is a graphic, repetitive, life-altering fact of life for many of the women  we come to know who are living in the abandoned buildings and on the streets of New Orleans.

Sheila’s  neighbor, Precious – who was living in an abandoned house around the corner – told her housing specialist that she was so happy to finally have a safe place to sleep on Winter nights. Precious had been going to a friend’s apartment on the most bitterly cold nights and her ‘friend’ always demanded sex in return for the few hours Precious stayed there.

Magdalena disappeared. We have yet to find Magdalena again after we originally found her sleeping on the back porch of another abandoned building.  She identified a man who sexually assaulted her on a regular basis, but refused to leave with us.  When we repeatedly returned to try to help her find safe housing, she was gone.

Diagnosed decades ago with schizophrenia, Margaret has been released from hospital after hospital back to the streets. Out of medications and sleeping in an abandoned building with a man who is also mentally unstable, Margaret pulls my sleeve and tells me he exposes himself to her each night and tries to force her to have sex.

Margaret does not want to leave with us that night, but moves into another abandoned building the next day.  The day Margaret’s application for housing is approved she is arrested on an outstanding warrant and brought to the forensic mental hospital.

This may be my least linear blog posting, but I am furious. I am angry. I am ranting because Sheila, Precious, Magdalena, Margaret, Daisy, Ms. Sage and Denise can’t. They are too busy trying to survive.

I am venting my rage on this blog because Sheila, Precious, Magdalena, Margaret, Daisy, Ms. Sage and Denise can’t.  But their stories need to be known.