The Blessings of Katrina 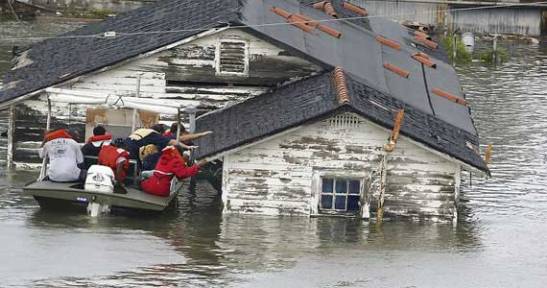 The mood this weekend across New Orleans was somber. Rain poured and dark threatening clouds filled the sky, and I couldn’t seem to shake the gloom. The rebroadcasts of people stranded on their rooftops five years ago only served to remind me of all those who did not survive. All weekend I could feel a pain in my chest at the sight of all those empty houses everywhere I go, the thought of all those New Orleanians still displaced, homeowners still struggling to make their houses habitable, disabled people squatting in abandoned buildings because of drastically inflated rents. This was supposed to be over with by now.

Yesterday, the fifth anniversary of Katrina, I awoke early in the darkness. By eight o’clock, I was on my way to the Lower Ninth Ward, the scene of the worst devastation in New Orleans, where a poorly designed levee broke with such force that a wall of water swept a neighborhood away, leaving not much but a huge barge behind. Much of the devastation remains. Spending the morning in the Lower Nine was a bad idea, I thought to myself all the way there.

As soon as I fell in line with a crowd of neighborhood people behind a high school brass band sending forth those joyful and unmistakably New Orleans sounds, my heart surged. We are together. We have survived. We are blessed.

Yes, blessed. One of the most unusual blessings brought by this great tragedy is that we now as a community have the shared collective experience of all of us having been homeless. Because 80 percent of the city was badly flooded and the mandatory evacuation lasted over a month under a National Guard lockdown, everyone was displaced for weeks, months or years. We all – rich and poor — understand as never before how important it is for everyone to have a home. Without a home, you have no sense of safety and security, your health deteriorates, you have no normal family life, and you cannot move forward with your life goals.

And that is why our community has been able – with government partners and an outpouring of help from people around the country, and with local churches, synagogues, businesses and schoolchildren pitching in to donate furniture and household goods – to set a record in rapidly re-housing 452 Katrina survivors living in two squalid homeless camps in downtown New Orleans. That is why outreach workers are still combing abandoned buildings to rescue and re-house our most vulnerable residents. That is why, despite a near-doubling of homelessness in a city where only 80 percent of the general population has returned, none of us will give up until every one of us has a home.

Martha Kegel is the Executive Director of UNITY of Greater New Orleans. UNITY rescues and re-houses disabled and elderly people living in the 55,000 buildings left abandoned in New Orleans as a result of Hurricane Katrina five years ago.