The doctor is now IN 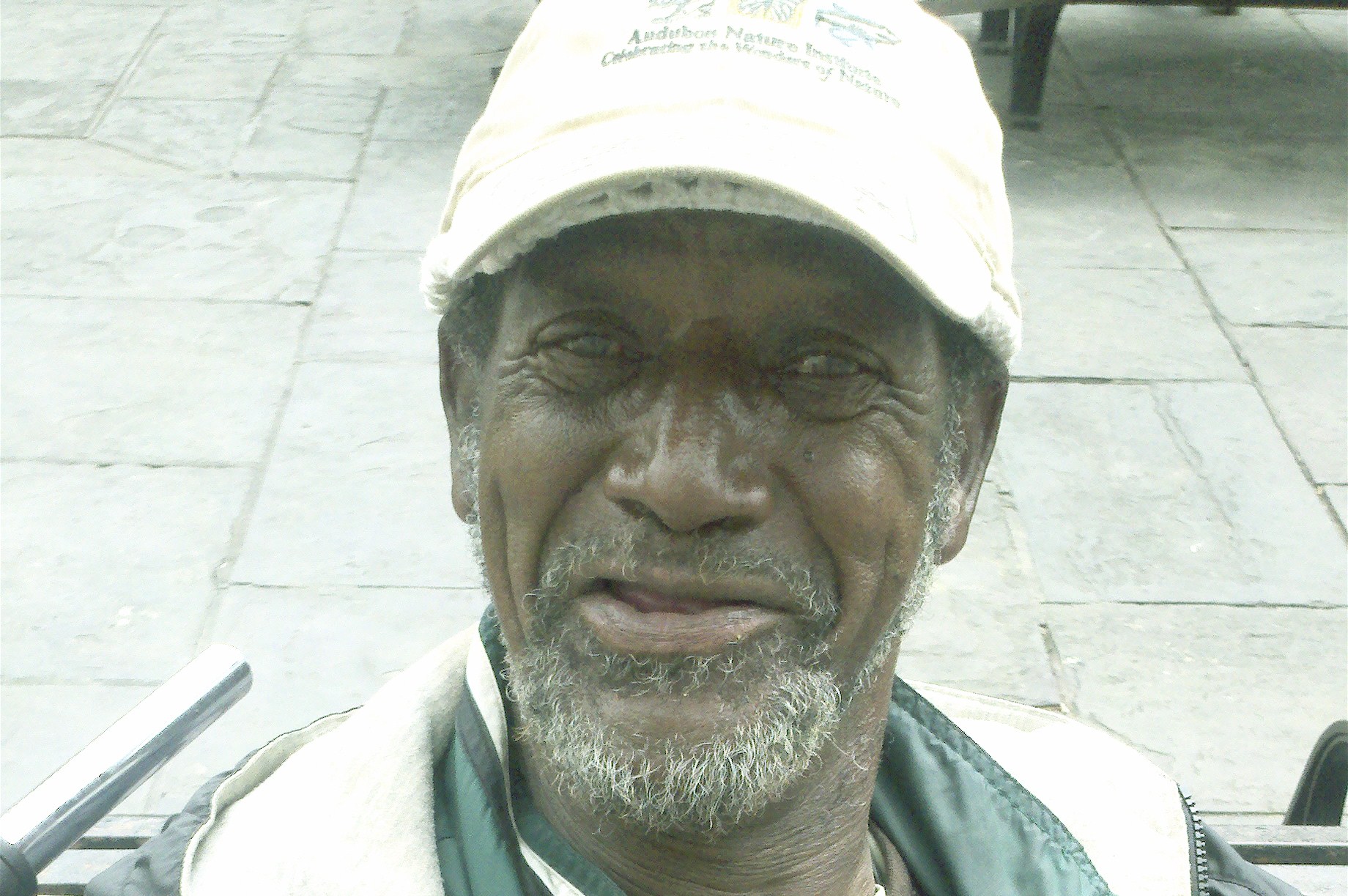 This blog is by Travers Kurr, a night-outreach worker on UNITY’s Welcome Home team, which searches the streets to rescue vulnerable, disabled people from homelessness.

I couldn’t tell you the first time I ever met the Mayor of the Square. I was probably standing in the shade from the Cabildo in Jackson Square, listening to the square’s ad hoc brass band along with wandering tourists and locals passing through the Square. That’s how most people have met him. Any tourist who has visited the Square and photographed the band most likely has a photo of Doc.

Most days, he’s the center of attention, dancing in front of the band with a golf club or a broom in hand, spinning and dipping it like it is his first dance at his wedding. He shouts and grins, showing off a mouthful of gums, since his teeth disappeared years ago. Or he secondlines around the 16-ounce Busch beer he often keeps at his feet, with a stethoscope around his neck and his head topped by a hard hat he’d signed.

He is hard not to love. In fact, while he was born as Philip Turner, he has long called himself Doctor Love. He signs that name on his hardhat, on notebooks, and on any objects he finds.

This spring, during French Quarter Fest, I was talking with Doc when a volunteer for the Festival approached us. “Hello, Doctor Love,” she said in a high-pitched voice.

“Do you know who this is?” she asked me, and without letting me answer, she said, “This is Doctor Love: a New Orleans legend.”

I wasn’t moved at the time by her comment, but she was not wrong. Doc, who turned 70 this year, embodies much of what I love about New Orleans. He is an almost-mystical character who can tell you stories for hours about meeting people you would never expect and ending up in off-the-grid places. He is unabashed and carefree. He is dramatic, engaging, and flirtatious.

He was also chronically homeless. My guess is that Doc lived in Jackson Square on and off for 15 or 20 years. He told me that he was staying near some relatives in the Marigny or Bywater when Katrina struck, but Doc also told lots of stories. It’s hard to decipher which stories are accurate, which stories he fabricated, and which have elements of both.

Over the past year and a half, my UNITY outreach team – Mike Miller, Clarence White, and I — would spend some part of our two outreach nights in the Square, building a rapport with Doc. We would talk about the Saints, old brass band songs, and his nephews, whom he claimed were all musicians. Since he called all local musicians “nephew,” that claim was somewhat true.

We also talked about his golf game, since he always had a few clubs by his side. I never saw him swing them, only use them as a cane or a prop. We talked about his family. He would talk endlessly about his beloved daughter, who lives in St Louis with his grandchildren. We talked about food and beer. In between golf, family, beer and food, I tried throwing him some ideas about housing.

Doc never told me that he was opposed to getting his own apartment. But it was hard to get him out of the Square. He felt like he needed to be there at night, as a patrol of sorts. In the morning, he felt it was his duty to sweep every inch of the pavement. Then in the afternoon, when the band showed up, he’d dance, with either the golf club or his broom.

Three months after we first talked, we sat down to complete the paperwork required to start the housing process. I had some incredible help with him as well. Katy Reckdahl, who was then writing for the Times Picayune, knew him and gave me a letter certifying that she’d written about him as a homeless person in the Square as far back as the late 1990s. When Doc disappeared from the square and I needed him for an appointment, Mike would help me look in every French Quarter corner store.

We got him to sit down with a psychiatrist and he was approved for a Permanent Supportive Housing program in about four months. But because he was reluctant to leave the square and often simply disappeared, it would take 13 more months until he finally had a key in his hand.

Doc was approved for a housing program that pays his rent with a Section 8 housing voucher through the Housing Authority of New Orleans. He’d get the supportive services he needed to stay housed through a great caseworker named Angie Bellanger from the National Alliance on Mental Illness of New Orleans. Normally, I brought clients to Angie’s office so that she could sit down with them, complete a housing-authority application, and fill out pages and pages of paperwork regarding their mental health and social history.

But this time, when Angie asked me if I could bring Doc to her office, I simply responded “probably not.” Getting Doc to leave the Square for anything was a challenge. Getting him to an appointment outside the Square at a specific time was near impossible.

So, on one hot September day, Angie amicably drove with me to meet Doc in person on his bench, in the middle of Jackson Square.

Then Mike, Clarence, and I would head down to Jackson Square at 1 a.m. and ask around. I often could find out something to report to Angie by talking to Square regulars, most of whom we knew by their nicknames. I had a hard time believing one message I left: “Angie, it’s Travers. Pork Chop said he went Mississippi with his girlfriend and Doc about two weeks ago, but Doc and his girlfriend stayed behind. I guess Pork Chop and Doc had a falling out.”

This was the challenge the next few months. We’d set an appointment to get an ID or go to the Social Security or housing authority offices. Then we’d visit him the night to remind him. But in the morning, he would be missing.

“I was bathing in the Mississippi—I was gigging with my nephew in the French Market—I was working—I biked to Houma visiting my family—I was golfing out in Lafayette; I teach the kids the game you know.” We got every answer imaginable and unimaginable.

For a guy who was such a staple in the Square, he could be awfully hard to find. And usually when I needed him the most.

Last fall, Angie found an apartment for rent in the 7th Ward just off of St. Claude, and Doc and I met her and the landlord there. It was a great place: a one-bedroom unit with high ceilings, a kitchen in the front and a porch so Doc could keep an eye on the neighborhood. It was also just a short bike ride from the Square.

Then he disappeared. For about three weeks. Then one day, Angie received a phone call from a social worker at a local hospital. Doc had mentioned Angie’s first name and remembered who she worked for. The two of us went to pick him up and move him into his apartment.

As we walked onto his floor of the hospital, Doc was relaxing near the nursing desk with his 7-iron and dressed in a bright yellow two-piece leisure suit with a brown African pattern.

I expected he’d be ready to run out the door with us. But he was in no hurry, as he leaned over the desk flirting with the nurse. “Baby, come see me,” he said. “I’ve got a show tonight and later this weekend. I know everyone downtown. I’ll introduce you to the band. That’s my nephew on the tuba.”

Then he swaggered out, holding the golf club like a fashionable cane. That afternoon, Angie and I housed him in a one-bedroom apartment in the 7th Ward. The Doctor was finally IN.

To support UNITY’s work with a tax-deductible contribution, click  here.