The Roof with a Hole Carved out the Top 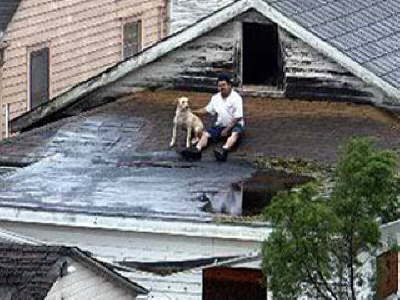 Every day I pass the intersection of Opelousas and Newton. There’s a roof there with a hole carved out the top, shingles tossed to the side. It’s where someone was pulled from the depth of their Katrina hell sequestered in a dark attic waiting for their liberation as the flood waters rose to take their life. You can imagine how it started. Someone, ax in hand, made those first swings hacking their way through the cypress beams of a 150-year-old home. As that small hole enlarged and the rays of sun peeked through the dark, the individual escaped to find a refuge on a baking rooftop surrounded by a flooded city. The helicopters danced through the neighborhoods as thousands like this person clung to the hope of a dramatic rescue.

We see dozens of such roofs every day. I always wonder about that first strike of the ax, the decision or perhaps the ability to choose life over a watery and lonely death. I wonder about the roofs of abandoned buildings without such a hole. What happened in those buildings, or more importantly, what didn’t happen? It’s still very real to those of us in New Orleans. Some of us know that story from experience, some from a friend or family member. We have neighbors who are still in Katrina-induced exile six years after the storm.

Millions of Americans saw the rescues, watched the drama unfold. But I know that roof isn’t real to the rest of America. Opelousas and Newton is a sound stage for the award-winning HBO series “Treme.” It’s a prop that sits in a parking lot waiting for a now infamous scene that, six years later, is still very real to us. In New Orleans we don’t need a re-creation of that awful history. It’s part of our identity. It’s part of everyday and it’s who we are.