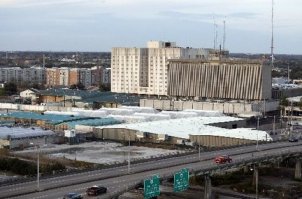 In the very near future, the New Orleans City Council will be asked to consider the construction of a very large parish prison. I believe that everyone involved in this discussion is acting in good faith and truly seeks a safer New Orleans for all its citizens.

But, to suggest that this can be accomplished by building an oversized, expensive new prison flies in the face of history, ignores the lessons taught by cities that truly seem to be making progress against crime and burdens the taxpayers in the city of New Orleans with enormous costs.

This may not be the best way to become a safer city.

A bigger parish jail may even provide an unintended, perverse incentive to fill the jail whether the accused needs to be incarcerated or not. It is a nightmare version of “if we build it, they will come.”

Baptist Community Ministries has studied public safety issues in New Orleans in great depth. We have spent more than $10.5 million over several recent years to create a safer community. Most of our spending has gone to local nonprofit organizations dedicated to a more functional criminal justice system. Drawing from our work in the field, we find very little evidence that our current incarceration practices really make us safer.

For example, we arrest more of our fellow citizens per capita than any other city in America, but in spite of our best intentions and hard work, New Orleans remains near the top of U.S. cities in terms of murder and violent crime. Our arrest and detention rate is a startling 300 percent higher than the national average. It is clear that we cannot arrest our way to safety.

Like most law-abiding citizens, I strongly believe that dangerous, violent criminals should be in jail. But, more than half of the people arrested in Orleans Parish are in jail for nonviolent, minor offenses. If we build a new jail designed to hold the average prisoner population for a city of our size, it will contain fewer than 1,000 beds. This is much smaller than the proposed new jail, which is designed to house nearly 6,000 inmates.

Cost is another consideration. Most of the initial capital outlay for the new jail will come from federal sources. The new construction will cost local citizens relatively little at first. Unfortunately, after the jail is finished the ongoing costs to operate it are likely to fall squarely on local taxpayers.

This debate is also about equity and fairness, ideals that are far more important than money. Under our current system, which supports a city jail larger than we need, our detention system is paid millions of dollars each year to hold state prisoners, and the city pays even more to warehouse the mentally ill. If we build it, will we then work harder to fill it when less expensive and more effective alternatives to incarceration are available?

We should consider building a significantly smaller jail and invest our savings in good public safety practices that have been proven effective across the country.

As an example, alcohol and drug abuse treatment programs produce very positive returns to society at a much lower cost than incarceration. Another good example is right next door. The Jefferson Parish jail has a maximum capacity of 1,262 inmates, and it presently houses only 937 people. This self-restraint is particularly impressive when Jefferson Parish has almost 100,000 more citizens than New Orleans.

A few years back, the citizens of Jefferson Parish avoided building a massive new jail and instead chose to add 400 new beds to their existing facility. Parish leaders redirected resources in support of more effective practices. Police officers in Jefferson Parish now use “arrest by summons” instead of immediate detention and they use physical detention only for felonies and certain types of serious, misdemeanors.

The entire system collaborates to ensure that the jail is used only for people who must be detained. Low-level defendants are most often released while awaiting trial. This approach is consistent with the policies encouraged by the Vera Institute, Metropolitan Crime Commission, New Orleans Police and Justice Foundation, Department of Justice, and the New Orleans Crime Coalition.

We have an opportunity to rebuild wisely and save the huge financial and social costs of unnecessary incarceration. We can take a new approach by diverting people who don’t need to be incarcerated into much less expensive, more effective programs. We simply do not have the money to waste on our outmoded overemphasis on arrests and detention. This is “old hat” and we are in a new day!

Building a bigger jail is an irresponsible way to spend public money. If we really want to create a safer, fairer community, we need a smaller jail for violent criminals and a bigger investment in crime-fighting approaches that work for everyone.

Byron Harrell is president of Baptist Community Ministries. BCM is a private foundation that provides financial support to nonprofit organizations in the five-parish greater New Orleans region. His e-mail address is bharrell.feedback@bcm.org.