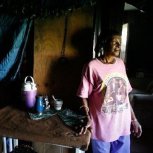 John McCusker, The Times-Picayune. Carrie Morgan-Handy spent three years living in this house on Laussat Place, without electricity or reliable plumbing, before being discovered by UNITY of Greater New Orleans

Carrie Morgan Handy, 63, lived in a mold-ridden cinderblock house in the 9th Ward for three years, until she was discovered a few months ago by caseworkers from UNITY of Greater New Orleans, who routinely search the city for squatters.

Handy, who was stranded on the roof of her nearby apartment for two days after Hurricane Katrina, returned to the city with her older brother. Faced with high rents and little income, they moved into the vacant house on Laussat Place, covering holes in the walls with plastic campaign signs and making do without electricity or reliable plumbing. The house, which sits on a particularly bleak block choked by weeds and vacant buildings, wasn’t theirs, but it was shelter in the neighborhood where they’d grown up.

The siblings are part of a disproportionate number of sick and elderly living in blighted buildings since Katrina, according to a UNITY report released Tuesday. Nearly two years ago on a freezing-cold night, UNITY caseworkers found Porter Powell, 90, squatting with 11 other homeless people in a vacant Central City mechanic’s garage with no water or electricity.

“It was then that we decided we had to do this on a full-time basis,” said Martha Kegel, UNITY’s director. Since then, an outreach team has systematically searched the city’s estimated 55,000 derelict structures, and found housing for more than 150 of the most frail squatters, including Handy.

From street-level, building-by-building surveys conducted over the past two years in 500 randomly chosen census blocks, UNITY estimates that between 3,000 and 6,000 people are part of this invisible homeless population.

Squatters are distinctly different than the typical homeless person. Those who are older and more sickly avoid the hubbub of traditional homeless shelters, preferring to hole up in vacant homes in familiar areas. Compared with the overall homeless population, squatters are four times more likely to be elderly and twice as likely to have a physical or mental disabliity, according to UNITY data.

Within the city’s blighted buildings, caseworkers have found squatters who are blind, missing limbs, in wheelchairs and suffering with untreated seizure disorders.

The city’s homeless population doubled after Katrina, partly because of a hole in the city’s safety net, caused by displaced “aunts, uncles, cousins and neighbors who once helped look after the most vulnerable elderly and disabled people in the community,” Kegel said.

The report released Tuesday calls for increased funding for case workers, homeless shelters and mental health services, as well as more assistance for moderate and low-income homeowners still trying to repair their houses.