TIME: Abandoned but Not Uninhabited: The Blighted Homes of New Orleans 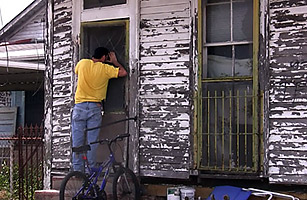 Mike Miller spends his days and nights doing outreach work with New Orleans' homeless, looking to help "the sickest of the sick." Jesse Hardman for TIME

“Don’t throw up now,” Mike King says as he begins to remove his right foot from a plastic bag. What “started off with a little spot,” King says, is now a full-blown infection that has caused his foot to grow to twice its normal size. Most of his heel bone is visible, emerging out of his skin. The stench of rotting flesh is overwhelming. “That’s bone I’m walking on. I’m walking on nothing but bone, you know. Every time I put my foot down, it hurts.”

A New Orleans native, King, 57, is squatting in what’s left of a building he has called home for 20 years, long before the post-Katrina floods gutted the shotgun structure. He moved back in after a stint at the Superdome, where he stayed after the storm. His home is one of New Orleans’ estimated 43,000 abandoned buildings — the worst such statistic of any U.S. city other than Detroit. A drive through the Big Easy will show many of these properties are hardly vacant.

Mike Miller, who does outreach work with the city’s homeless, spends his days, and more importantly his nights, looking for “the sickest of the sick” — people like King who are hanging on by a thread. Miller, who works for a local nonprofit called UNITY, says that when he’s out on his rounds, in addition to humans, he sees “fleas, lice, mice, rats, raccoons, possums and various other swamp creatures that most cities don’t have to think about.”

He points to a hornet’s nest forming in a light fixture at one “squat,” as he calls abandoned but inhabited buildings. The woman he’s gone to visit, who has just fled out the back, is in terrible shape. “This lady has a partial amputation of her finger. Got bit by a mouse.” But a missing finger is the least of the 39-year-old’s problems. She’s HIV-positive, a paranoid schizophrenic and down to about 90 lb. In the corner of the front room is a bedroll — basically the springs of an old mattress, covered with a few jackets. The area of the floor on which she sleeps is a mess of plastic-foam containers, food wrappers, empty bottles, Doritos and feces.

As he cruises around New Orleans in a blue minivan, Miller pieces together the histories of his “clients,” as he calls the locals he is trying to help, by way of what he sees: “the freshness of the food, dates on bottles, dates on newspapers, the active nature of a bedroll. By now I’ve seen hundreds and hundreds, if not thousands, of bedrolls that are used every night.”

Miller, 31, is an imposing northerner, built big like his hometown of Chicago. But his welcoming “Y’all” and wide grin are all New Orleans. He says “we” and “us locals” when referring to his adopted town, a place that no doubt needs him after what the 2010 Census shows is a drop of more than 140,000 residents in the past decade.

There are success stories, says Miller. He shows off one house, boarded up with a big yellow “Scheduled for demolition” sign on the front. Two weeks before, on one of his night searches, he found a husband and wife huddled in the corner. “We’ve been waiting for you,” they told Miller when they realized he was with UNITY. With a little assistance, they moved across the street from their old squat into a rental home.

As Miller speaks, King is pouring himself some Miles’ dry gin into a plastic cup, forgetting all about the foot that he says might come off as soon as that afternoon. King says what he really wants, in addition to some better housing, is some electricity so he can watch a little TV. “A small generator, not no big ol’ generator. Just a little juice, a little juice, and I’m satisfied. At least for a few weeks. Then I’m gonna need a woman.”