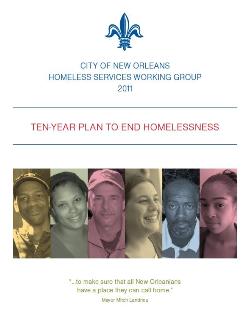 UNITY of Greater New Orleans celebrates the release of Mayor Landrieu’s 10-Year Plan to End Homelessness, which UNITY, by virtue of its longstanding role as lead agency for the homeless Continuum of Care and administrator of collaborative grants for permanent and transitional housing and services, will play a large role in helping to implement. At its first meeting with the new administration last year, UNITY requested the creation of a new city plan to end homelessness, as the previous one had been written before Hurricane Katrina caused an unprecedented crisis of homelessness and scarcity of affordable housing and mental health services. The plan released Nov. 28, 2011 has been vetted by national experts at HUD and the U.S. Interagency Council on Homelessness, is aligned with a new federal plan to end homelessness adopted last year, and is the culmination of a months-long planning process by the newly established Homeless Services Working Group appointed by the Mayor. Federal Judge Jay Zainey and UNITY board member Jade Brown-Russell co-chaired the Working Group, while UNITY Board Chair Luis Zervigon and Executive Director Martha Kegel served on the Executive Committee. Dozens of UNITY member agencies participated in the planning process, as did members of the business community, university professors, affordable housing developers, and homeless persons.

Mayor Landrieu states of the plan, “Unlike any other city in America, residents of New Orleans know what it is like to be without a home,” said Mayor Landrieu. “After Hurricane Katrina, many who never thought they would ever be homeless were suddenly left with nothing. Unfortunately, on any given night, approximately 6,500 New Orleans residents are without a home including unsheltered individuals, youth and families. This is an urgent issue that demands immediate attention. I’d like to thank our federal partners and our local working group members for coming together to create a workable plan to address this challenge. This Ten-Year Plan to End Homelessness in the City of New Orleans will lead to an increase in available resources, and will improve coordination and collaboration.”

Click here to read the 10-Year Plan to End Homelessness