What We're Really Cheering For 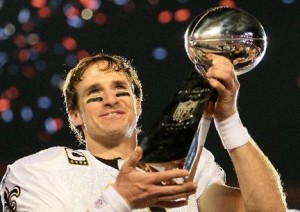 There are clearly five major events in the history of New Orleans:   the founding of New Orleans in 1718 by the French colonizer Bienville, the Louisiana Purchase in 1803 in which we decided to let America taste real food, Andrew Jackson defeating the British in the War of 1812 at English Turn, Hurricane Katrina of 2005, and the Saints victory in Super Bowl XLIV.  Some New Orleanians might also consider the creation of the original Mardi Gras founders the Mystic Krewe of Comus in 1857 and the creation of Pat O’Brien’s Hurricane cocktail in the 1940’s as equally important, but I digress.

The problem with having two of New Orleans most important historical achievements in such close proximity —  Hurricane Katrina and the equally devastating Saint’s offense — is that now we’re again in the peculiar predicament of explaining ourselves to the rest of America.  Historically, this dilemma causes both confusion and wonderment.  Those New Orleanians who have been able to articulate the idiosyncrasies of our collective idiocy, like Tennessee Williams, William Faulkner and Truman Capote,  have been able to achieve remarkable fame and fortune.   I’m no author.  I work with the homeless.  So here goes.

Almost four and a half years ago, Hurricane Katrina seared images of unimaginable suffering into the American psyche.  Tens of thousands of Americans flooded into the Superdome as the flooded streets of New Orleans saturated the city with both death and destruction.  We lost over 1,900 neighbors, family and friends in that water, and tens of thousands are still missing.  They’re missing because they’re not home.  There are still, four and a half years later, over 60,000 blighted abandoned properties hiding thousands of homeless disabled individuals.  The “suburbs” of New Orleans now stretch across the United States as New Orleanians have resettled in cities and towns in which they were evacuated to when the flood festered in our historic streets.   While a newly renovated Superdome can hold 90,000 screaming Saints fans adored in Black and Gold and is an adept metaphor for the spirit of the Orleans Parish (we do parishes, not counties) citizenry, there is an equal number of New Orleanians cheering not about football, but for a home they are unable to live in.  Through the crushing realities of abject poverty, disability and government inaction, the New Orleans they know drowned in the floodwaters on August 29, 2005.

Almost five years ago, many of our fellow Americans questioned whether New Orleans should be rebuilt.  They wondered whether rebuilding New Orleans was worth the trouble, worth the money.  Those of us who still live here know why New Orleans is important.  Those who are still struggling to come back know why New Orleans is important.  That’s what we’re really cheering for.  It’s so much more than just a football game.  It’s a collective recognition that our spirit, though all our trials and tribulations, through fumbles and interceptions, lives in each and every one of us.  We’re not done rebuilding our city until every New Orleanian has a chance to celebrate Saints football where they should: only in New Orleans.